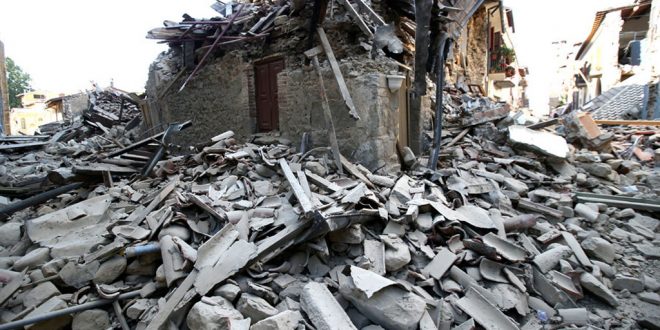 A WELL-known Italian deli and wine bar in Killaloe is supporting a small town in Central Italy, which was left destroyed by the recent devastating earthquake.

Ponte Vecchio is appealing to people and businesses in the twin communities of Ballina and Killaloe to make a donation to its collection for Amatrice.

It is being organised by the owner Andrew Lofthouse and his friend Antonello Allocco, who have kept in regular contact with each other since they forged a strong friendship in their 20s in Rome, where they grew up.

Amatrice bore the brunt of a massive earthquake that demolished at least half of the town. Amatrice “is not here anymore”, the city’s mayor said after the August 24 quake, which registered 6.2 magnitude on the Richter scale.

The quake killed at least 278 people throughout Central Italy, including an elderly couple whose home collapsed on them. Fifty-three of the people who died were from Amatrice, a heavy toll for the small town.
Before the quake caused havoc and destruction, Amatrice was known for a famous pasta dish and its 14th century religious landmarks. It was listed as having 1,046 people.

On Sunday in Ponte Vecchio, where he has spent part of the summer helping his friend run his Italian deli and wine bar, Antonello told The Clare Champion that he knows Amatrice very well, as it is a 90-minute drive from Rome.

He said Amatrice is a very famous village on top of a hill with a big mountain chain, which is probably the cause of the devastating earthquake. He pointed out that Amatrice is located close to L’Aquila, which was completely destroyed by an earthquake in 2009.

“It is a beautiful place, particularly in the summer to escape the heat of Rome. A lot of people living in Rome come from Amatrice.

“I don’t know anyone that got injured but everyone I know there at least lost their house. It was really shocking.

“It is a very popular tourist village and a lot of the hotels, which collapsed, were fully booked out with elderly people who went there to escape from the hot summer in Rome,” Antonello said.
He said restaurants all over Europe who are cooking the famous Amatrice pasta dish are donating the price of the meal to the disaster fund.

Thrilled with the solidarity shown by Ponte Vecchio and people in the twin communities of Killaloe and Ballina, he pledged to bring the money raised by the appeal directly to help those worst affected in the ruined Italian village.

He expects to spend a few weeks working to help the relief effort as a volunteer. “Italian people are really touched by the support the relief effort is receiving in Ireland because Amatrice is a village they know very well. The earthquake was particularly bad in terms of the number of deceased, injured and the overall damage.”

Having travelled around Lough Derg during his numerous trips since his first visit in 2007, he described the district as a beautiful area. “I feel really welcome in Killaloe. It is a beautiful place with lovely people. I really enjoy my time here.When you drive around Lough Derg, you could be mistaken for thinking you are in Umbria or Tuscany in Italy,” he said.