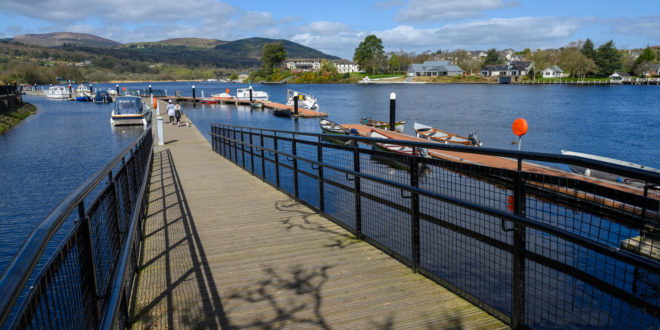 A sunny day at the canal in Killaloe. Photograph by John Kelly.

BUSINESSES in Ballina and Killaloe have re-opened on a limited basis as they come to terms with operating new social distancing guidelines during the Covid-19 pandemic.

McKeogh’s Hardware, Ballina, closed for two weeks at the end of March when the national lockdown was announced.

Fred McInerney of McKeogh’s recalled they operated on a call-and-collect basis for a number of weeks before they re-opened fully on Monday.

Mr McInerney said the area of the store was mapped out before the lockdown and acknowledged most people are adhering to social distancing guidelines. Gloves and hand sanitiser are provided in the store and perspex screens are provided for staff.

He said there was a big demand for paint during the call and collect period and now the demand has switched to outdoors with large numbers requesting DIY to complete repair jobs and decking.

The Lakeside Hotel is planning to re-open from July 20 with restrictions for social distancing.
It is expected their leisure centre will re-open on August 8, subject to government approval.
Staff have been meeting through Zoom on a weekly basis to discuss priorities around keeping in contact with their guests through this turbulent time.

Management have been formulating a re-opening protocol for all areas of the hotel, which will cover physical and delivery changes to the hotel with social distancing, sanitising and staff and guest protection as key aspects.

The cafe started to provide takeway pizza Friday, Saturday and Sunday from 5 to 9pm and may start providing takeway coffee on Sundays with the re-opening of the nearby Farmers’ Market Between the Waters this Sunday.

Andrew Lofthouse said that operating social distancing in the cafe will be tricky and will considerably reduce the numbers of people that can be served under new health guidelines.

Mr Lofthouse admitted hasn’t a definite date in mind for the full re-opening of the cafe as he is now focusing on developing his takeway business.

“I don’t think people would be comfortable to sit down yet. When that is going to change I don’t know, do any of us when things will get back to normal for restaurants and cafes,” he said.
He confirmed he has now problem re-opening when it is the right time to do so.

Derg House, Killaloe, which is a coffee shop and French patisserie offering Irish breakfast and food has re-opened to provide takeaway for four hours from 10 to 2pm on Tuesday, Friday and Saturday.

It started providing takeaway food last weekend, which went quite well and this is something there will be a renewed focus on over the coming months.

During the busy summer period, Gooser’s, which is run by chefs Tomas and Fidelma Andrews takes on additional staff, which can increase up to 20 employees to cope with demand.

Even though 80% of their business is food, Ms Andrews explained they will not be able to fully re-open until August 10 as they have a pub licence, which she believes is unfair.

She expressed concern a lot of the peak season will be gone by the time they re-open fully, having already lost good business from St Patrick’s Day, Mother’s Day, Easter and the Bank Bank Holiday weekend.

“If we could have re-opened in June we could get some of the season. The two metres social distance is too far apart, it is very long. In the rest of Europe, it is one metres, we will be able to serve a lot less people with two metres.

“We do have a lot of outdoor space and outdoor seating and a good bit of space inside. At the end of the day nobody knows what way things will go. The government has not given us any proper guidelines for re-opening, we just have to wait and see,” she said.