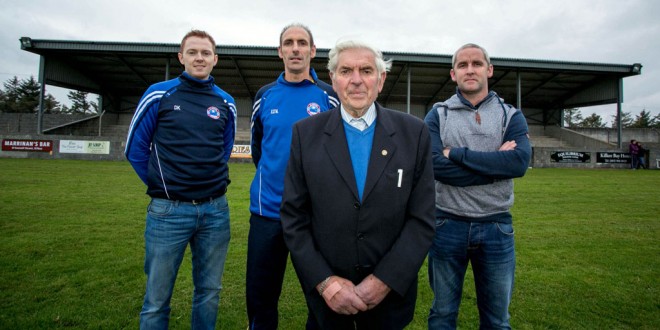 THIS Saturday night in the Stella Maris Hotel, St Senan’s GAA Club, Kilkee will host a tribute night to John Lynch. Originally from Moveen, the now retired Kilkee club secretary filled that role for 41 years from 1971.

This week, The Clare Champion met with John, who still sells club lotto tickets 52 weeks of the year. He was joined by his successor Diarmuid Keane, club chairman Christy Kirwan and three-time championship winner Noel Roche, who also represented Ireland in the Compromise Rules in the 1980s. Their admiration and respect for John was clear as they listened to him reflect on more than four decades at the epicentre of Kilkee GAA.

“I came into town in 1961 and met my life partner, Mary. We married in ’61. I was working as a tradesman and I was thankful to the people of the parish for giving me the work. I didn’t have to emigrate,” John explained. A former O’Curry’s footballer, it took him a few years before he became actively involved in Kilkee GAA Club.

“In 1971, I was coming out of 7.30pm mass one Sunday evening. Joe Hennessy caught me and said ‘come on, we’ll go up to the AGM at the Thomond Hotel’. There were about 24 people there and Paul Costelloe resigned after eight years. Nobody would fill the position.

They asked everybody and Fr Pat Culligan came back to me the second time and said ‘will you take it until the next meeting?’ I couldn’t refuse him. I hadn’t any training in that type of work but I had common sense and I had a nice bit of Irish. I got an Irish book to look up the names of new players if I didn’t know their names in Irish,” he recalled.

“I fell in love with the type of football Kilkee played. They had a lovely side-step. The big disappointment was the 1981 county final [against Kilrush]. We hadn’t won a county final since 1942. We were there and were good enough but we didn’t do it. I never forgot that. But then, of course, in 1984 we won the centenary year championship,” he said.
When Noel first wore a Kilkee jersey, John was already club secretary.

“He was there before I started and that’s a long time ago. We used to meet at Clancy’s Corner for underage matches. The call would go out, ‘where are the jerseys? Where are the the water bottles?’ The answer would always be, ‘John Lynch has them in the car’.

These might be trivial things to a lot of people but if there was anything missing, it was ‘Where is John Lynch’,” the 1992 Munster championship winner reminisced.

Noel only really appreciated John’s input when he became involved in management.

“I only saw exactly what the man did when I was involved with a team [in management]. I was involved with the U-21s for five or six years and the amount of organisation behind the scenes was huge. Arranging pitches and referees with people saying things like, ‘we don’t want to play on that pitch. It doesn’t suit our style of football.’ He would come and say ‘look it Noel, we’re not going to win this one so don’t push it’.

If John said it, that was it. He’d take a bit of stick about referees that were appointed but he had nothing to do with that. He was so used to it for a finish, it was like water off a duck’s back. In the good times, people got praise for what they did but I don’t think John got half enough praise. In the bad times, he got a lot more stick, which was not deserved at all. Unfortunately, Kilkee never won two in-a-row and that was a big thorn in our side. We just couldn’t put it in for two years in-a-row in Kilkee,” he sighed.

Roche cites the purchase of Kilkee’s current playing field in 1976 as a huge moment in the club’s history.

“Signs on, we never threatened to win a senior championship until that field was ready. We trained out there in 1980, we got to the final in ’81 and we won it in ’84. This was a godsend. Even to walk up to the old field [near Kilkee Golf Club] was training on its own. That didn’t go down well with the players either. There was three minor championships won in the mid ’70s.

There was a couple of U-21s in ’76 and ’79. John knew at that stage that if we could keep these guys together, we could do something. The one thing we wanted above anything else was to have a field with dressing rooms. He saw that. I know there were other people involved but I know now that John was the main instigator in all that,” Noel stated.

John clearly recalls how the pitch was purchased.

“The Sisters of Mercy put the field up for sale. It was seven and a half acres. We hadn’t any money but we bought it for £9,000 before they put it on the market. I’ll never forget that for the Sisters of Mercy. That was in 1976 and we played our first game in the field in 1980. Then we built our dressing rooms and later we built the stand,” he explained.

John remembers one particularly frustrating element surrounding the acquisition of the field.

“We had all our stuff ready after buying the field. It had gone through solicitors and we sent it to Munster Council and it got lost. We had to start all over again. I know where it went but it didn’t come back. It was bad enough to do it once.”

Diarmuid, he current secretary, first saw how John worked in the role when he was a teenager.

“When I was 12 or 13, I started getting involved. I’d be helping opening the field and things like that. That was the first time I really saw what John does for the club. I don’t think half the people in the town know. I haven’t done half as much this year as John used to do. John was Mr Kilkee from 1971 until 2014. Everything to do with the club, John was at the heart of it. He held the club together during the barren years,” Diarmuid maintained, noting that he has a bit to learn himself in some respects.

“In our first league game this year, we went down to play St Breckan’s in Kilrush. I thought I was great. I had the jerseys and the water bottles inside in the dressing room. We were about to go out and someone said, ‘where are the footballs?’ I had forgotten them. I don’t remember that ever happening in John’s time. It just goes to show that the little details are the big things,” he smiled.

John remembers a couple of entertaining incidents from his time as club secretary. On one occasion, he had to urgently contact Johnny Hill, Lissycasey, who at the time was part of the Clare Football County Board.

“I got talking to his wife, Jackie and I said I had to talk to Johnny that evening. She said he was gone to a meeting. I said ‘tell him to ring me at any time because I’ve a bedroom in the phone’. Johnny reminds me about that all the time. In the excitement, I got mixed up,” John laughed.

He always wanted Kilkee to represent themselves as positively as they could and was a stickler for small details, such as wearing the proper togs and socks. When he had to be, though, John was somewhat of a diplomat.

“We had a problem years ago where we had banned four refs. I went to an AGM and asked the players for a clean slate and they agreed. We won the championship under one of the refs we had banned. I was fierce happy with that. You must move on and you can’t keep things in the back of your mind. When the game is over, it’s over,” he said, before recounting how he held on to the full set of jerseys.

“We washed the jerseys by hand. I was very mad about players keeping jerseys. We were playing back in Naomh Eoin one day. I didn’t wash the jerseys for two weeks after the game beforehand because number three was missing. I left the jerseys into the dressing room and they were smelling them inside in the bag. It worked. They all came back after that,” he revealed.

Still in possession of every piece of GAA correspondence he received or wrote, John also learned that maintaining a good relationship with the county board was imperative.

“Over the years when they got to know you, you were treated very fairly but if you were caught on one item, you were marked forever. Being a club officer, you must be truthful and use common sense,” he advised.

In his first year as Kilkee club chairman, Christy has a heightened respect for the role of a club administrator.

“I only realised this year since I came in, what’s involved. The amount of work that goes into it is unreal. My memories of John go back to when I was playing U-10. I lived down past his house. You’d see the jerseys out on the line. Washing jerseys or lining the field for a game might seem like a small thing but it’s not appreciated. I didn’t know what it was like to run a club until this year. It’s a serious amount of work trying to do your own day’s work and then do this,” he said.

In conclusion, John indicated that his love of GAA extends beyond the needs of Kilkee. It goes deeper than merely wanting his own club to do well.

“The winning of a championship is great but it isn’t everything. If you win now and then, that’s icing on the cake. I wouldn’t want to be a club that would like to win the championship ever year. The day that Kilmihil won the championship [in 1980] with the Murphy brothers, after playing their hearts out for years, that was very nearly better to me than if we won it ourselves,” he said with utter sincerity.