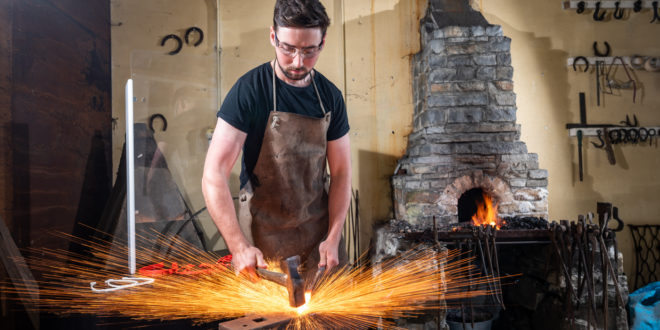 Conor Murray, a Kilkee based metal designer & blacksmith, has pivoted the output of his business to meet current demand during the Covid pandemic. Photograph by John Kelly.

A WEST Clare company that is steeped in tradition dating back hundreds of years has found itself diversifying radically to stay alive, and to serve the public during the Covid-19 pandemic.

Kilkee Forge, which dates back to the 1700s, and is now run by fifth-generation blacksmith and industrial designer Conor Murray. With his normal bespoke commissions for sculptural projects and outdoor furniture drying up dramatically because of the Coronavirus restrictions, Conor identified a need for protective products for small businesses locally and drew on resources recently acquired by the businesses to create a new line of highly sought after products.

“I had to pivot because while our regular lines of work were disappearing, new needs were arising,” he explained. “I could see that, in terms of the protective perspex sneeze guards, that the bigger shops and supermarkets were quickly looked after but the smaller ones weren’t. It seemed that, in West Clare in particular, smaller businesses were being left behind and I decided to see what I could do to come up with solutions.”

As an award-winning entrepreneur, Conor had the track-record and, crucially, the resources to respond to a growing demand for protective equipment. Named the 2019 Best Young Entrepreneur for Clare, he had invested the prize money in a 3D printer and sophisticated CNC (Computer Numerical Control) technology, which he had originally planned to use to make scale models of art commissions.

“That equipment was intended really for scale models of larger sculptures and things like that,” Conor outlined, “but now that some of the work has dried up, I’ve re-used them basically for sneeze-guards and visors.” The sneeze guards are now being sold to businesses around Clare and Limerick and as more firms begin to re-open, demand is increasing. “Things have definitely gotten busier now that businesses are looking at how they are going to re-open,” he said. The visors, which are made with Conor’s 3D printer are being donated to the Health Service Executive (HSE).

“I responded to a call-out to designers and, with the printer, can produce between 15 and 20 visors a day,” he said. “They go to a HSE hub at Limerick Institute of Technology (LIT) and they’re distributed on from there.”

Among those who have availed the the sneeze guard services to-date, is Anne O’Gorman of O’Gorman’s Service Station and Shop in Kilkee. Speaking to RTÉ about her business, she said: “I just wanted to protect myself and my family, my staff and of course my customers. My husband had been sick and he was vulnerable, so I just decided to ask Conor to make a screen for us. He came in with a prototype and showed it to me and I was delighted, I said, ‘that’s just what I need’.”

To-date sales are being conducted on-line at kilkeeforge.ie or by contacting the company on 085-1134072.

Fiona McGarry joined The Clare Champion as a reporter after a four-year stint as producer of Morning Focus on Clare FM. Prior to that she worked for various radio, print and online titles, including Newstalk, Maximum Media and The Tuam Herald. Fiona’s media career began in her native Mayo when she joined Midwest Radio. She is the maker of a number of radio documentaries, funded by the Broadcasting Authority of Ireland (BAI). She has also availed of the Simon Cumbers Media Fund to report on development issues supported by Irish Aid in Haiti. She won a Justice Media Award for a short radio series on the work of Bedford Row Project, which supports prisoners and families in the Mid-West. Fiona also teaches on the Journalism programmes at NUI Galway. If you have a story and would like to get in touch with Fiona you can email her at fmcgarry@clarechampion.ie or telephone 065 6864146.
Previous cattle in the frame for online sales
Next The Clare weddings cancelled due to Covid-19