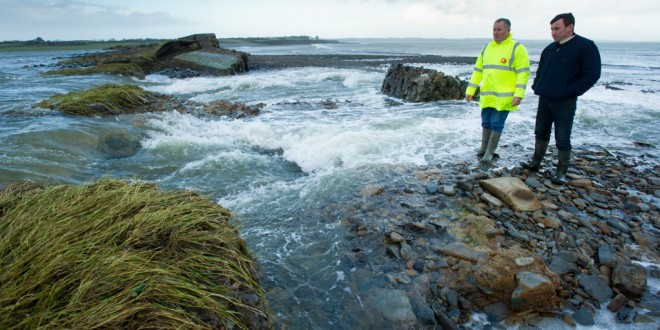 FOUR families in Kilcredaun, Carrigaholt were marooned on Monday when high tide hit the picturesque townland, which is home to an historic lighthouse. The flooding has resulted in the townland of Kilcredaun on the Loop Head peninsula being rendered effectively an island.

A total of six houses were cut off by the flooding in recent days. The grounds of the nearby O’Curry’s Irish College has also been hit by flooding following the breaching of a wall.

Meanwhile,  a number of houses in Carrigaholt village were hit by flooding when the village wall was breached at high tide.

Locals are very concerned that their difficulties will be exacerbated should further storms hit the area in the coming days.

West Clare native Peter O'Connell has worked for The Clare Champion for 12 years and covers everything from sport, especially GAA, news, features and has been even known to branch into the fashion scene on occasion.
@@westclarepage
Previous House prices fall 11%
Next Jennifer Lauren in court over airline incident