Home » Arts & Culture » Kíla on their way to Doolin 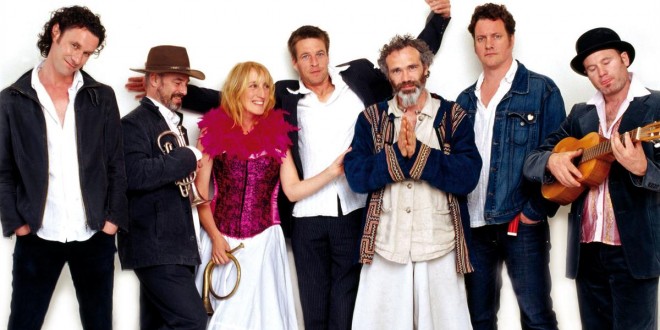 Kíla on their way to Doolin

Having played together for over 20 years, Kíla are one of the country’s most innovative groups, having created their own style of music and winning endorsements from the likes of Bono and Sinead O’Connor.

Speaking about the group’s sound, musician Colm Ó Snodaigh said; “It’s an eight piece band, so it’s a big band, a big sound. In the last few years we’ve taken in a new member who’s exclusively a drummer, it’s the first time. We’ve always had drums on stage but they were only used for one or two tracks, but is the first time we’ve had that kind of sound all the way through it. There’s fiddle, flute, pipes, bodhrán, drums, mandolin, guitar, bass guitar, it’s kind of a big sound. It suits the festival stage in a way and it’s very dance-y music.”

He said that he loves seeing people moving to the music at their shows. “It’s great fun to be honest with you. Probably the best thing about it is seeing people dance. If they’re up dancing they’re just having a laugh, they’ve big happy smiles on their faces, it’s fantastic. We’re very lucky to be able to get that response.”

With such a big sound and a fondness for different styles of music he says the group like to work on new types of music, but don’t have as much opportunity to try new things as they would wish. “We would like to experiment more, maybe that’s the way to put it. There’s a lot of family life involved at the moment so we don’t get together as often as we used to or we don’t rehearse as often as we used to. Recently we bought a new set of pipes that we’ll be getting in a few weeks and maybe that’ll give us a chance for a bit more experimentation. Ronán plays a thing called a wave drum, kind of an electronic bodhrán and you get a really odd sound from it. In the studio we would experiment more perhaps.”

He feels that the group’s sound may in part be explained by a love of visual art. “A lot of us come from artistic backgrounds so that’s part of it, maybe. This sounds really strange perhaps, but we see music if that makes sense, we’d see pictures as we’re playing music. A lot of it is colour driven, and that sounds incongruous around music. My mother is a sculptor and an artist and that accounts for three of us, there’s a love for sound and a love for colour and different music from around the world. There’s a lack of fear for making a mess of things! We’ve often made a mess of things, but you make a mess and try again. There’s a delight in different sounds, maybe that’s how it evolved.”

He has two brothers in the band, Rossa and Rónán, and he says Kíla gives them a chance to stay close to each other. “One of them lives in Leitrim and I wouldn’t get to see him much if we didn’t play in the band. The other brother lives reasonably close to me so I do see him more. What working with brothers does give you is a bass line for communication. I know with Rossa he can stare me in the eyes and go ‘no way’. I’m not hurt by it, my ego isn’t touched, I know he’s absolutely bang on, he’s thinking about the music. It allows for a solidity.

He says that while things are relatively quiet this summer, the group still have a bit going on. “We’re playing in Westport at the end of June, we’ve a festival in Laois in August, we’re going to Sweden and France and Spain please God, there are a few gigs abroad. There’s a reasonable smattering, it’s not the busiest time but it’s okay, we’ve the head above water. We’ve a new album coming out in September and that’ll get things rolling again please God. There’s a soundtrack album coming out probably next year so there will be two things very quickly.”

Previous Increase in vacant commercial premises in Clare
Next 1,200 runners on Shannon runway