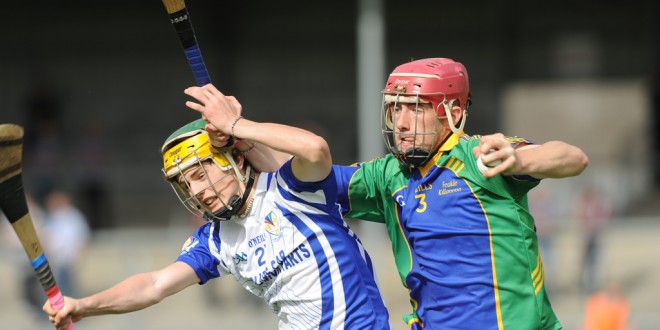 Aidan Kennedy of Kilmaley in action against Evan Mc Mahon of Feakle/Killanena during their Minor A county final at Cusack Park Photograph by John Kelly.

Kilmaley are the minor A hurling champions for the third time in six years, thanks to a merited one goal victory over Feakle-Killanena at Cusack Park on Saturday afternoon.

Appearing in the final for the third year in a row, they bounced back from last year’s loss to win back the title they last held in 2012.

The winners went into the game with a full squad available and this meant that Sean Kennedy who missed the semi-final was back in the side. He emerged as the game’s top scorer with 0-11 to his credit, ten coming from placed balls.

This was one of a number of key performances for the winners. At the other end of the pitch, goalkeeper Conan Fitzgerald was outstanding, producing three particularly excellent stops, two in the opening half and the other at the start of the second half.

A number of the Feakle-Killanena side were seeking a double having helped Feakle to the intermediate title last week but, on the day, they had to give best to a better balanced Kilmaley who held the upperhand in the key areas.

For the second half the East Clare combination moved Steven Conway from full forward to a role in the half back/midfield area but try as they did they just could not breakdown a solid Kilmaley defence for the goal they needed.

At the half way point, it was 1-6 to 0-6 in favour of the winners and while Feakle-Killanena piled on the pressure on the resumption, the closest they got to the winners was two points.

Kilmaley raced into an early three point lead through Kennedy frees before Cathal Noonan opened Feakle-Killanena’s account. The new champions were dealt a huge blow after ten minutes when they lost full back Colin Hehir to a shoulder injury but, despite this, they continued to hold the upperhand right to the finish.