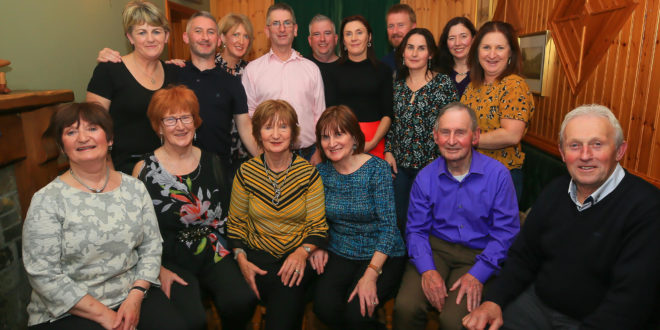 THE lock-down has certainly be put to good use by a eight branches of a West Clare family, whose membership extends from the Loop Head Peninsula all the way to San Francisco.

Over the month of April, the Keane Family Challenge has seen more than 40 members take part in all kinds of fitness and sporting activities to raise over than €2,000 for the West Clare Cancer Centre in Kilkee.

The mastermind of the fitness and fund-raising challenge is Johnny Doris of Portarlington. He is the grandson of Kathleen and John Keane, of Keane’s Pub in Carrigaholt. Their eight children include Johnny’s mother Bridget Doris, now based in County Laois, and her twin sister Mary Greene, who lives north of the Golden Gate Bridge in San Francisco. Johnny’s uncles Dominic and John Keane live in the US where they have been immersed in the challenge, as have his godmother Kathleen Foley of Foley’s Pub in Cross, and Mags and Pakie Keane of Carrigaholt, as well as Johnny’s aunts Geraldine McNamara of Moveen and Helen O’Connell of Kilmurry-McMahon. Over the course of last month, families from San Rafael, San Francisco, Clare, Cork, Tipperary, Waterford, Laois and Longford all got involved.

“It’s great to have the whole family group connected and active and interactive in this difficult time,” said Johnny. “We set up a WhatsApp group and we’re all posting videos and jokes and a bit of banter and it’s great craic. We’re keeping each other going. We’re encouraging each other to go out an about and stay fit and healthy and to get something positive from this awful pandemic. Half an hour exercise per day was the challenge and we’re all feeling an awful lot more positive in mind, body and spirit.

“I’m big into fitness and running myself,” Johnny noted, “but a lot of the extended Keane family wouldn’t have been. The challenge was to do the exercise and then put a Euro in a jar when you’d done it. If you didn’t do your daily exercise, you had to donate €2. As well as posting videos of our exercise routines, there was a bit of story-telling and even some prank calls and the connection was just great.”

Over the course of the challenge, the families completed more than 1,200 combined exercise sessions. Sticking within the 2km travel restrictions, they covered over 5,000 miles collectively which, Johnny pointed out equates neatly to the distance between San Francisco and Carrigaholt.

“The West Clare Cancer Centre is a service that does simply incredible work and it’s very close to our hearts. We were delighted to be able to use our time during the lock-down to raise some funds for the centre and to stay connected to each other.”

Fiona McGarry joined The Clare Champion as a reporter after a four-year stint as producer of Morning Focus on Clare FM. Prior to that she worked for various radio, print and online titles, including Newstalk, Maximum Media and The Tuam Herald. Fiona’s media career began in her native Mayo when she joined Midwest Radio. She is the maker of a number of radio documentaries, funded by the Broadcasting Authority of Ireland (BAI). She has also availed of the Simon Cumbers Media Fund to report on development issues supported by Irish Aid in Haiti. She won a Justice Media Award for a short radio series on the work of Bedford Row Project, which supports prisoners and families in the Mid-West. Fiona also teaches on the Journalism programmes at NUI Galway. If you have a story and would like to get in touch with Fiona you can email her at fmcgarry@clarechampion.ie or telephone 065 6864146.
Previous Plea for mediator in Clare Bus dispute with NTA
Next 12 Further COVID-19 Related Deaths In Ireland With No New Cases In Clare