CAHER volunteer Kathleen McNamara has been doubly nominated in the prestigious Ireland Involved Awards for her commitment to her community.

Kathleen is the only Clare resident to have reached this stage of the competition and has been nominated for her commitment under sports and recreation and for the I-care about the community category.
The final will take place next Thursday at Royal Kilmainham Hospital, Dublin.
Kathleen is the current chairperson of Killanena Camogie Club, where she runs the administration of the club with an eye to detail, all the while keeping money coming in, attending training sessions and organising matches.
In addition, her role sees her co-ordinating trainers, chasing up sponsors and ordering jerseys and club gear.
Locals have acknowledged that she makes every person feel they are an important and valued part of the club and she is liked and respected by the players, club officers and parents.
Kathleen encourages former players to get involved in the life of the club and co-wrote a book with her husband entitled Skirts Hurling, which chronicles their previous sporting achievements. She has also recognised the important social function that the club can play in a small rural community, where teenagers are left without many viable social outlets.
Speaking about her nomination, Kathleen says she was shocked but honoured to have been nominated under the two categories.
“Of course, I was totally surprised and I don’t really know how to react. It is lovely for the club, though,” she said.
She acknowledged that this year has been very good for the parish in terms of activities and the 50-year celebrations of the Killanena club.
She was instrumental in putting together a programme of events to coincide with the anniversary, including the staging of Killanena’s first fashion show, and managed to get members of the club from the 1950s to return to join up with the current members.
“There is great camaraderie in the club and the community and to me that’s hugely important,” Kathleen said.
In addition, a number of sporting outings have been organised both at home and abroad by the camogie club chairperson and she is currently organising a reunion for the 1980s teams as a final celebration to be held in Canny’s in Killanena on November 28.
While she is heavily involved in sport, she has her fingers in many other pies within her community, running the local youth club, offering swimming classes and participating in a number of charity events each year.
She is especially proud of the Lough Graney Youth Club, which is going strong with more than 30 members.
The group is currently involved in a filming project, where the youth club are interviewing people in their community to establish a sense of pride of place.
Kathleen will be honoured among 29 other nominees at the awards event hosted by the Taoiseach’s Office in Royal Hospital Kilmainham, when one nominee will be selected as a winner in each of the category awards.
President Mary McAleese will present the overall award to the 2009 Irish Volunteer of the Year, who will then represent Ireland at the European Parliament in Strasbourg, France on Saturday, December 5, which marks International Volunteer Day. 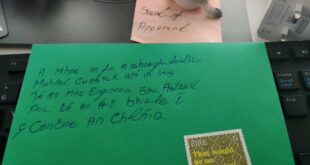