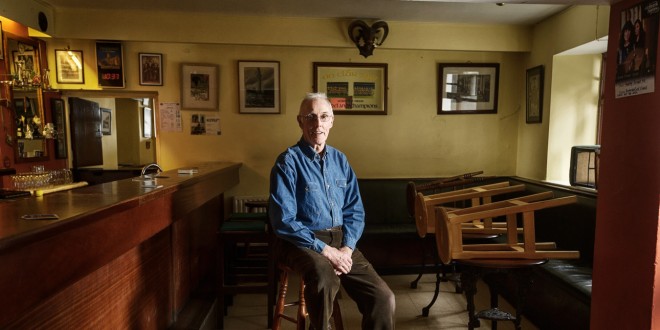 THE claim many years ago by Samuel  Johnson that “there is nothing which has yet been contrived by man, by which so much happiness is produced as by a good tavern or inn” springs to mind when  looking back on nearly 80 years of trading in O’Dea’s pub, Ennis.

Over that period, the popular O’Connell Street premises carved out a niche for itself in the licensed trade of the capital town. Like most pubs, it has many a story to tell with its characters – and there were many of them – the great music sessions and the sing-songs, now almost exclusive to a family-run pub like O’Dea’s.

But it has run its race with the decision of proprietor, John O’Dea, to retire from  the licensed trade entirely and consider other options for 66 O’Connell Street.

Last weekend, as patrons ordered their last drinks, they looked back on great times in O’Dea’s but, at the same time,  expressed their disappointment at the closure of yet another old style establishment. It was  the same story mid-week when John opened the bar for the last time to treat  customers who for years have been Wednesday night regulars.

Serving drinks for the 50 years, John is looking forward to a break from the heavy demands on a publican. He will be celebrating his 66th birthday at the end of April and feels the time is right for him to look at less demanding pursuits.

Coming from a farming background, John has already commenced a course in horticulture and intends putting it to good use on the land which he has purchased in Drumquin, a few miles from Ennis. In the back of his mind also is a trip to California to help on the farm of his brother-in-law.

An enthusiastic golfer and a member of Lahinch Golf Club for almost 30 years, John is looking forward to spending more time on the famous championship links.
But 66 O’Connell Street is to remain John’s permanent address. Therefore he and Jack Heaslip will continue to be the only people to live on their premises in the town’s main street.

A long history
When he turned the key on number 66 for the last time as a pub, John took the time to share the history behind the premises with The Clare Champion.

It was first and foremost a grocery shop  with a  liquor licence attached and the sign over the front door tells passersby that it was  licensed as far back as 1847 with the Melia family. Fast forward to the 1930s and a Mr Walsh, an RIC man, was the licensee.

In  the late 1930s, the O’Dea name came into the picture. Darragh brothers, Tom and Mick O’Dea, had been working in the grocery trade in Boston but it was always their intention to return home to make a living. For some years they had been keeping an eye on the O’Connell Street premises with the intention of purchasing it.

Tom had worked in Boston for about 14 years and Mick was there for about 12 and, by 1938, they had saved enough Yankee dollars to make  their dream come true, with the help of their father. Mick was the first to arrive home but went back in 1940 when World War II broke out. Tom made the trip home in 1938.

In the difficult war period, they had no credit facilities from the different companies as they were just starting up but near-by businessman Michael Fawl came to their rescue. He was from the same area as the O’Deas and he supplied them with whatever they wanted for the grocery shop. Tom and Mick still retained land in their own area and it was used to grow vegetables for the shop.

At that time, Tom ran the business on his own but he found it difficult to trade during the war years. At one stage he was was contemplating  going back to Boston but instead asked Mick to come home and help out.

Mick did make the journey home and as John pointed out, escaped being conscripted into the US army after the bombing of Pearl Harbour.

The O’Connell Street premises traded under the name O’Dea Brothers. It survived the war years and never looked back. In 1950, Mick married the former Margaret O’Brien, Cappafeean, Crusheen. She was a nurse and had treated people after the German bombing blitz of Birmingham. In later years, she became a midwife at Ennis General Hospital. They had five children, John, Mary, Anne, Clare and Mick.

At that stage, O’Dea’s was trading mainly as a grocery shop  with the bar business at weekends and when Tom died in 1966, Mick was left with the task of running the bar, as well as a farm, while Mrs O’Dea looked after the grocery side. John had notions of helping out in the grocery end and, as a teenager, delivered messages by bicycle to  customers around the town. At that time the grocery side made up  nearly 80% of their turnover.

John was told by his father that the only times they had people singing in the bar was Christmas Eve and St Stephen’s Day. However, on the death of his uncle, John came on board in the bar and it was the start of a career that saw him gradually take charge of affairs behind the counter, lasting  for the past 50 years.

With the  arrival of supermarkets, John ceased the grocery business, concentrating on the bar and switching to an office licence in the front portion of the premises. With supermarkets also promoting  office-licence facilities later on, John decided to devote all of his time to the bar.

In more recent years, O’Dea’s was mainly a town pub but going back a good few years, its clientele included big numbers from the Clarecastle parish when the late Paddy  Markham from the Ballyea area was behind the bar. He went on to run his own pub in Parnell Street but became anxious to move on. On the advice  of Tom O’Dea, he went to New York where he became a big name in GAA circles and was responsible for the opening of a new GAA pitch, referrerd to locally as ‘Paddy’s Field’.

Since John  first stood behind the counter in O’Connell Street, he notes the bar business has changed a lot. In the 1960s it came on a lot but by the mid ’70s and ’80s, it was in a different place. Since the millenium it has changed completely, with the drink-driving laws and the smoking ban.

“People are now more health conscious. They have bigger houses, they have more entertainment and have a drink at home,” John notes.

Great characters
Interested in all things sport and with photographs on the pub wall to remind him of his playing days with Ennis Rugby Football Club, John paid tribute to the great characters and customers over the years. He said they made life easier and the only time he would turn on the television was to watch sport and the news. Entertainment came in live to the bar and some customers were a step ahead of any of the comedians on television.

As to his decision to call it a day after 50 years pulling great pints, John said, “I am in good health and fettle and none of the O’Dea family are interested in taking it over. I will live on the premises and I have just completed my first computer course, as well as starting the course on horticulture,” he said.

Apart  from the roles played by his late father and mother, John also recalled the help from his brother and sisters who took their turns behind the counter. Anne is  now in California, where she is assistant librarian in a local college and also promotes Irish culture and music with her own radio show; Mary started her nursing career in England, went to Georgia in America and continued her nursing career in Galway, where she is now living with her husband and family; Clare, now teaching yoga in Limerick, studied in New York where she involvd herself in contemporary dance while Mick, now an internationally-famous artist, is president of the Royal Hibernian Academy and has won numerous  awards.

It was a night full of nostalgia when the The Clare Champion staff held their last get-together in O’Dea’s last Thursday night. For years they took over the back bar of the pub for their Christmas parties and for presentation functions and because of its close proximity to The Clare Champion offices, O’Dea’s was affectionately known to staff as ‘the front office’.

A familar saying in the newsroom was “we’ll cross the road for one”.

To mark the final sitting in O’Dea’s, which ended with the trademark sing-song, Tony Mulvey thanked the O’Dea family for their kindness and hospitality over the years and on behalf of The Clare Champion management and staff, made a presentation to John.
John thanked the Champion staff for their support and made reference to its famous characters, some now deceased.