Home » Regional » Jimmy still behind the counter 50 years on 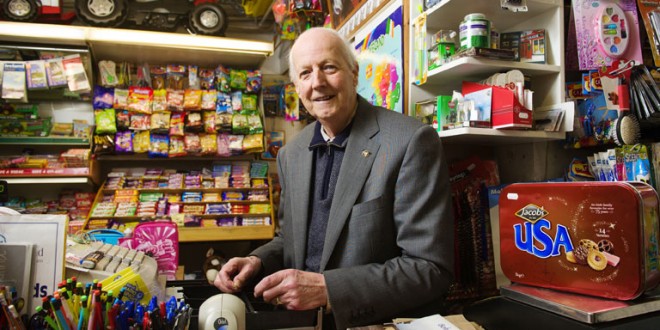 Jimmy Whelan, of Whelan's shop in Killaloe, is celebrating 50 years in the retail business. Photograph by John Kelly

Jimmy still behind the counter 50 years on

RETIREMENT is still not an option for 78-year-old Killaloe shopkeeper Jimmy Whelan, despite reaching 50 years in local retailing on Friday.

Jimmy still loves meeting his loyal customers in Whelan’s Foodstore at the bottom of Main Street, Killaloe, as much as he did when he opened a small shop in Church Street in January 1964.

Then aged 27, he rented this building, which included the shop, a small kitchen and two bedrooms at a cost of £2 weekly.
Jimmy never envisaged he would transform the old Kincora Dance Hall into a thriving business, while he was playing the button accordion with the Jimmy Whelan Dance Band at this venue from 1964 to 1970.

His current premises, which is located nearby, became renowned as a popular entertainment venue during the construction of the Shannon Scheme in Ardnacrusha and throughout the ’30s.

Two West Clare brothers opened a supermarket there in 1970 but were forced to shut down following a fire a few weeks later.
Identifying an opportunity to develop a new business at a prime location in the shadow of Killaloe Cathedral, Jimmy bought the charred shell and developed a general grocery and toy business, as well as a residence for years, following extensive renovations.

He set up home at Hill Road but subsequently purchased an old doctor’s residence, Abbey View on Convent Hill, where he currently resides.
After taking out a considerable bank loan, he was working almost 14 hours a day, seven days a week in an effort to establish his new business and keep up loan repayments.

Now entering his sixth decade in the retailing industry, the former musician is still as keen as ever to maintain the business.

“Retiring never crossed my mind. I am reducing my hours but I still work seven days a week. Self-employed people tend to keep going.

“I love meeting the people every day. I would be bored sitting at home. I come over here [home] to make a cup of tea at about 5pm and after a short while, I would be getting itchy feet to go back again. It’s my life.

“I will stay going as long as God gives me good health. People expect me to be there in the shop. People tell me ‘I was in the shop yesterday and you weren’t there’,” he says.

A non-drinker and non-smoker, he enjoys good health and goes for a walk most days. Jimmy and his late wife, Eileen, started off with a small shop. She worked as a general assistant in the Lakeside Hotel and had the benefit of meeting and dealing with people on a regular basis, which was a big advantage starting out with a new business.

His current working day starts at about 10.30am and extends until 9pm at night, with two and a half hours of a lunch break and two hours of a tea break, seven days a week.

He said customers became more “cagey” about purchases in 2008 and would often handle an item twice before making their decision.

He expects the celebrations marking the 1,000-year anniversary of Brian Boru in the twin communities should result in an increase in the number of tourists attending the locality this year.

“The scenery in Killaloe is second to none. We have Lough Derg on our doorstep. The 13-arch bridge is a popular tourist attraction. There is friendly rivalry between Killaloe and Ballina when Clare and Tipperary are in action. However, for club games, Killaloe people support Ballina GAA and vice versa. When it comes to business or community activities, there is no real divide between the two,” he explains.

Over the last five decades, he has survived the competition from large supermarkets and shopping centres, despite the fact that a lot of people travel to Limerick City for their shopping.

He recalls self-service was the most dramatic new addition that changed retailing completely. Previously, he remembers stacking items high on shelves to try and store as much as possible in a small shop.

However, he acknowledges that even he had to respond to the main selling maxim, “eye level is buy level”.

Pride of place in his shop is Jimmy’s kitchen clock, which has been there since the retail outlet first opened. Jimmy couldn’t afford to take a day off on Sunday, which was usually his busiest day, because other shops closed and an influx of day trippers regularly made the short trip from Limerick to Killaloe to enjoy local amenities.

A break at the time was taking an afternoon off for a trip to meet his wife’s family in Lusmagh near Banagher in South Offaly.

Following the death of local newsagent, Margaret Cleary, who was based nearby in Bridge Street about 10 years ago, Jimmy started selling newspapers, which proved to be very beneficial.

“Even though I had no real experience in retailing, it was something I always felt I would like to do. I never served my time behind a counter before I started the business,” he adds.

A native of Dunkerrin near Roscrea, his parents, John and Annie, were married in the United States of America, came back and bought a farm in the southern tip of Offaly in 1928 and endured very difficult times during the mid ’30s.

John sold his farm in Dunkerrin and went on to manage a farm in the Tinerana Estate between Killaloe and Ogonnelloe for the Gleeson family up to their death.

Having met his wife, Eileen, in the Lakeside Hotel, they got married in October 1963. They reared eight children. Eveleen is in the shop, Ann Marie is in Cork, Margaret, Jean and Theresa are in Dublin, while Emer is in Belfast. James runs a passenger boat hire business in Killaloe, while Brian is a local developer. Eileen died in 1998.

Following in the footsteps of his father, who played the melodeon, Jimmy still has fond memories about the six years he spent playing the button accordion in the six-piece band.

Band members included the Adley brothers, Michael and Tony; Sean Gissane, Bobby Gissane, Dick Fitzgerald, Seamus O’Neill and Neilie Barry.
Admission used to be 17½ pence, which is about two cent in today’s currency. Dances would be run by local clubs, such as Smith O’Brien’s GAA Club or the Ballina Handball Club, who took the profits.

The band was more popular for bookings in Kerry than in any other county. They played old-style dance music; waltzes, quick steps and slow foxtrots. By the time rock and roll became all the craze, he had packed it in.

“Bookings were harmless. You could go out to Bridgetown on a Friday night and get seven pounds for six fellas. You would not be rich out of it. Some musicians got about 10 shillings and the top two or three fellas could get £1 a man. Up to £28 was the most we got for providing entertainment for a night,” he says.

While the showbands were becoming popular, Jimmy recalls they could be regarded as being a “bit behind the times”, as they continued to playing brass instruments, guitar and two accordions.

The original band started with the two Gissane brothers, who subsequently went to England. Jimmy took over where they left off under the stewardship of band leader and talented trumpet player, Dick Fitzgerald.

Jimmy was forced to give us his musical career in the mid ’60s, due to the demands of working in a shop and rearing a young family. At one stage, he had five children under the age of six.

“The lads were below practising in the Kincora Hall, while I was above serving customers in the shop. My real interest was in the shop, as I was losing interest in the band. It was hard-earned money anyway driving 40 or 50 miles into Kerry, Galway or Limerick,” he says.

An Irish traditional music lover, Mick Delahunty and Maurice Mulcahy from the showband era were his favourite entertainers and he enjoyed their music at dances in the Jetland, Limermick over 30 years ago.

Listening to the radio is one of his favourite pastimes nowadays but his life continues to revolve around the shop. At this stage in his life, he wouldn’t have it any other way.