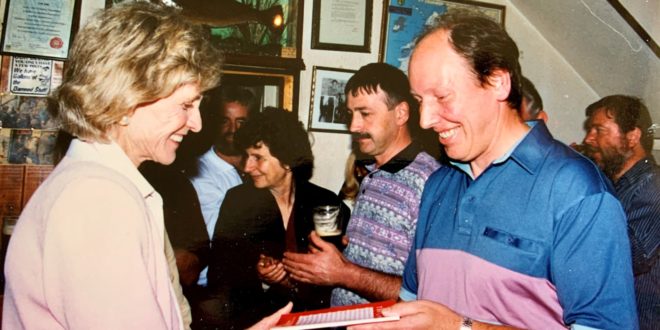 Michael Durack of Killaloe Writers' Group presents the late US Ambassador to Ireland Jean Kennedy Smith with a copy of The Creel Volume Three when she dropped into Liam O'Riain's bar, Ballina in the mid nineties. Photograph courtesy of Michael Durack.

MORE people from South-East Clare have come forward to share their memories of the visit of former US Ambassador Jean’s Kennedy Smith’s visit to Killaloe in July 1995.

It emerged this week that the family roots of John F Kennedy’s youngest sister go all the way back to Killaloe and to former High King of Ireland, Brian Ború.

A recent Clare Champion article on Mrs Kennedy Smith’s trip to the twin communities of Killaloe and Ballina has prompted more locals to recall their encounter with the former ambassador.

Killaloe resident Naoise Lawlor, his daughter, Saoirse and his wife’s uncle, Donal O’Riain, were some of the people who managed to be photographed with the former US Ambassador after she had officially opened the Feile Brian Ború festival in 1995.

In fact, Mr Lawlor still has a copy of the edition of the Clare Champion, which published the photograph of him looking at the ambassador with Saoirse in his arms.

“Getting Jean Kennedy Smith to turn up was a big coup for the festival. It brought a great buzz to the town. The weather wasn’t great that weekend but it didn’t matter because it was a historic moment for the town as there are great connections between Clare and America.

“To have one of the Kennedys in Killaloe was a big thing. There was a lot of people clamouring to get get in and have their photograph taken with her because she came across very well and knew what she was talking about.

“She was fantastic and engaged with everyone on the night. She couldn’t move around too much because there was a huge crowd there on the night.

“My daughter was only two and a half at the time. I am friends with the Ballina poet Michael Durack who presented the ambassador with a book when she stopped off in Liam O’Riain’s bar, Ballina,” he said.
Naoise, who at Main Street, Killaloe was born in Raheen Hospital, Tuamgraney, has five children and is a local painter and decorator.

“Mrs Kennedy Smith, who’s been a regular to Killaloe since taking on the mantle of ambassador, seemed charmed by the revelations, immediately referring to Brian Ború as her ancestor and telling the local folks it sure was great to be back home.

“The legend of Biran Ború had figured large in her childhood, she said, with the stories being passed on from generation to generation though never in connection with her family.

“However, her brother, Teddy had claimed kinship to the High King all over the bars of Boston and she reckoned, he for one, would be delighted that history had come down on his side.

“For her part, the ambassador said that until Friday she hadn’t realised her ancestors were from Clare but she was very happy with the news, particularly as the county were now Munster champions.

“In her view, Killaloe is blessed to have such a gifted historian as Sean Kierse but in any event, she believes the town itself to be a very special place and has already promised to make another official visit once the newly established heritage society is up and running.

“According to Sean Kierse, the Kennedy line owes its existence to Brian Ború’s father, Cinneide who was King of Thomond and traces in direct descent through Duncan, son of the kingand a master of the hounds, which was a very exalted position in those days,” Ms Scanlan reported.

Parteen historian, Donal O’Riain recalled there was a great buzz of excitement during Ms Kennedy Smith’s visit to the lakeside town.

Mr O’Riain, who was accompanied by his granddaughter, Eilís Ryan, who was home from the United States of America at the time, recalled the former ambassador was very nice to talk to and very friendly.

He spoke to her about the time that Brian Ború marched 120 miles to Dublin to defeat the Danes in the Battle of Clontarf.