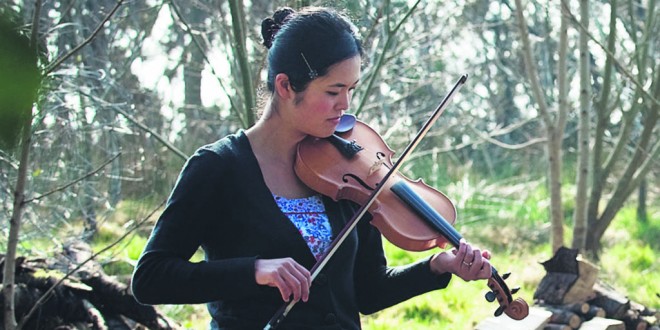 JAPANESE woman, Erika Mochizuki, together with another compatriot, have set up an Irish music project called Blackbird Music, which will see 11 musicians from their homeland come to East Clare this week.

Dai Komatsu, who is an Irish fiddle-player based in a city called Nagoya in Japan, and Erika have been using their project to provide Irish music material over the internet. Erika originally had the idea of introducing this rich musical culture to Japanese people.

She met Dai for the first time in Ennis in 2005, when he came there to learn traditional Irish fiddle-playing. The idea of this project gradually evolved from that first meeting. Together, they organise and coordinate concert tours and workshops in Japan for traditional Irish musicians. The music summer camp in East Clare is another element to this.

“Our aim is to provide opportunities for Japanese people to learn about Irish music here and this camp is a part of it,” Erika explained.

This is their first time hosting a music camp and already they have 11 Japanese musicians signed up to attend. The gathering will include musicians in their 20s to their 50s and they are all first-time visitors to Feakle, although some have been in Ireland before.
“We believe it’ll work well to have the camp on in an intimate village like Feakle. We’re hoping they’ll discover the roots of Irish music here and how it’s passed from generation to generation in an area,” Erika said.
Her own interest in Irish music developed from her father, who loves all kinds of music in general. He bought a couple of CDs of Irish music and Erika immediately liked the sound of it and wanted to know more about it.

“Fortunately, there was someone who was teaching traditional Irish music in Tokyo at the time and I started going to his music classes. Later on, I discovered there was a big enough Irish music scene in Tokyo and Comhaltas Ceoltóirí Éireann Tokyo branch have been working on introducing the culture of Ireland to Japanese people,” she said.
Erika has been living in Ireland for the last 10 years and believes if she hadn’t come across Irish music, she wouldn’t be living here today. She said it has a large following in Japan.

“Whichever city in Japan you go to, you’d find a few Irish pubs and there would be a circle of Japanese people who play Irish music. I was in this scene myself when I was living in Japan and I came over to Feakle for the festival in 2002 with a couple of friends, who were also musicians, and that’s when I met my future husband, Pat. I suppose traditional Irish music is very popular now, all over the world. I know there are Korean people and Chinese people who play Irish music in their countries. The quality of Irish music is very attractive, wherever you’re from. But, in Japan particularly, because it’s such a big country and people are very open to different cultures, Irish music is well accepted. Japan is one of the most popular destinations for musicians from Ireland,” she said.

Although the camp is taking place following the Feakle Festival of Traditional Music, it is a completely separate entity, as it was coincidental that the timing matched with a traditional holiday in Japan.

Most of those attending for the camp have been learning Irish music in Japan already, as Erika explains.

“I know a couple of them very well and they’ve been at it for around 15 years. Because of the lack of teachers over there, a lot of Japanese people are self-taught and the Irish music they play is quite different somehow. They’re coming over for the experience and hopefully they’ll learn a lot about Irish music here,” she said.

All those attending for the camp are musicians. Four play the fiddle, three play the flute and three play the concertina, and one picked up a whistle recently. The camp takes place from Tuesday August 12 to Friday, August 15.