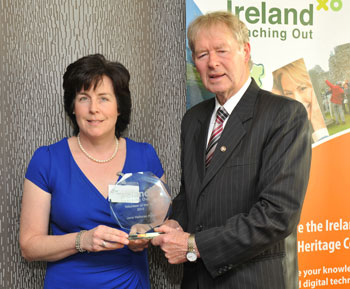 Jane’s Efforts to Reach Out Recognised

TULLA resident Jane Halloran Ryan was presented with the Ireland Reaching Out Volunteer of the Year award at a ceremony held in Limerick at the weekend.

Born and raised in Connecticut, Jane’s Irish ancestral connections are in Clare, Cork, Sligo and Antrim. Having always had a keen interest in genealogy and family history, she became involved in the Ireland Reaching Out project in 2011.

Speaking about the award, Jane said, “It’s great. I am delighted to be acknowledged but, at the same time, I have to be honest, all of us are great volunteers. The organisation has terrific volunteers working for it. I’m also delighted for Tulla and we joked at the event about it being another All-Ireland. It’s been a great year for us in Tulla and Ireland Reaching Out is a terrific project on so many levels. I think it will go from strength to strength with not only the heritage work but with tourism and with business exchanges and cultural exchanges.”

Of the projects that the Tulla Reaching Out group has been working on this year, Jane said the one that stands out as having reaped the most rewards is their historic graves project, which is ongoing.

Jane has traced her roots back to the 1760s on one side and to the early 1800s on the other. She only recently found out that not only do her ancestors come from Tulla but there is also a connection to Feakle as well.

She inherited her love for genealogy from her mother, Paula McDonough Halloran, and her paternal grandmother, Helen Barry Halloran, who gave her invaluable assistance in getting started in genealogy and was a great source of information, having lived until she was 101.

She said she was lucky in that there was a strong tradition of letter writing in the family, which spanned 80 years, and when Jane made the decision to move to Ireland in 1991 to study law, she was welcomed home with open arms by her cousins.

Jane is the parish liaison for Tulla, assisting many of the diaspora in reconnecting with Tulla and the surrounding area upon their visits to Ireland.
She was awarded the prize at a conference held in Limerick on Saturday, which brought volunteers from across Ireland together. The conference, which provided an opportunity for discussion and shared learning, marked a milestone for the ever-developing nationwide diaspora programme, as its volunteer numbers exceeded 3,500 earlier this month.

She was selected as one of three nominees,while the others were Dolores Whyte from Offaly and Anne Marie Healy Kalishoek from Cork. Mícheál Ó Muircheartaigh made the presentation to Jane.

Mr Feerick said, “Jane was chosen as the overall recipient of the Volunteer of the Year 2013 as she has been a firm supporter of the programme since its inception. She has developed and expanded the network of volunteers in Clare and has been a positive force in the engagement and interaction of the diaspora with Tulla. Overall, she is a shining example of what an Ireland Reaching Out volunteer can achieve and we are honoured to work with her.”

Ireland Reaching Out (Ireland XO) is a multi-award winning programme based on a simple idea; instead of waiting for Irish descendants and their global counterparts to come back to Ireland to trace their roots, they go the other way. Working through voluntary effort at a townland and parish level, communities identify who left, tracing them and their descendants worldwide and inviting them to become part of an extended “virtual” community with their place of origin.