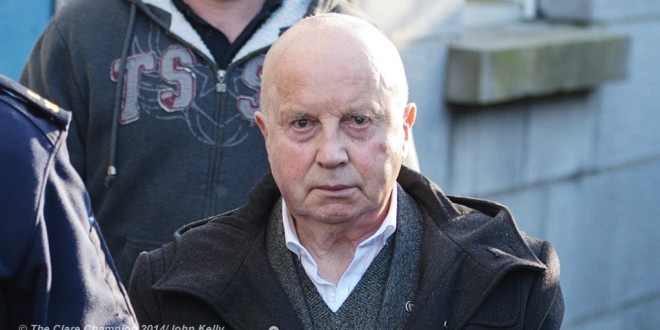 An 81-year-old former primary school principal jailed for indecently assaulting 11 of his female pupils has had his six-year jail term reduced to two by the Court of Appeal.

Patrick Barry, of Well Road, Kilkee, had pleaded not guilty to 67 charges of indecently assaulting 11 women on dates between 1964 and 1985, while they attended Moyasta National School as pupils.

He was found guilty by a jury of 59 counts of indecent assault and not guilty of the remaining eight counts by direction of the trial judge Judge Gerald Keyes.

Barry was given an effective sentence of 11 years imprisonment with the final five suspended by Judge Keyes at Ennis Circuit Criminal Court on November 19 2014.

Speaking on behalf of the Court of Appeal today, (Friday) Mr Justice Garrett Sheehan said the trial judge had erred in locating the gravity of the offending at the starting point of 11 years imprisonment.

Mr Justice Sheehan said the trial judge seemed to have held that the absence of remorse was an aggravating factor and while remorse may be a mitigating factor the obverse could not be held.

The Court of Appeal considered five years as the appropriate starting point for Barry’s sentence but his advanced age and serious health problems were not such to warrant a wholly suspended sentence.

Bearing in mind his age, health problems and the “significant contribution” he made to his community on retirement, Mr Justice Sheehan said the court would suspend the final three years of the five year sentence.

He was required to enter into his own bond of €1,000 to keep the peace and be of good behavour for the suspended period of the sentence.

The court heard that Barry had a release date of May 20 2019. Following his successful sentence appeal he is likely to finish serving his new sentence next spring.

In an unsuccessful appeal against conviction last month, Mr Justice Sheehan said the court was “unable to hold” with the former teacher on any of his 12 grounds of appeal.

Mr Justice Sheehan said Barry had been a teacher in a small, mixed, two teacher school in rural County Clare 30 to 50 years ago.

Eleven of his female pupils claimed that when they were in fifth and sixth class they were indecently assaulted by him, the judge said.

Mr Justice Sheehan said Barry would sit down beside the girls at their desks and touch them indecently or would call them to the front of the class and make them stand between his legs while he was pressed against them.

Sometimes, the judge said, he brought their hands up and down his legs and made some of them touch his genital area.

Apart from two particular complaints, all the offences occurred in the classroom in the presence of other pupils, Mr Justice Sheehan said.

Counsel for Barry, Roderick O’Hanlon SC, had submitted that the sentencing judge did not set out the special circumstances as to why Barry’s sentences were imposed consecutively.

Mr O’Hanlon said Moyasta was a very small community where everybody knew each other. As such, the loss in standing for Barry would have a very significant affect on him for the balance of his life.

Furthermore, Mr O’Hanlon said Barry has a significant hearing problem. Since going to prison his hearing aid broke and it wasn’t repaired for three months or longer.

Among Barry’s grounds of appeal against convition was a submission relating to an alleged failure by the prosecution to sufficiently particularise counts on the indictment.

Each of the 67 counts on the indictment under the heading ‘Particulars of Offence’ had alleged that Barry, within a time band of four months at an identified school, indecently assaulted a named female complainant.

Mr Justice Sheehan said at one point during the trial, the prosecution offered to amend the indictment by further particularising counts, but explained that this could lead to an indictment containing “up to 300 counts”.

“Counsel for the defence rightly refused to be drawn into negotiations on this matter and the matter was left there,” Mr Justice Sheehan said.

Counsel for Barry, Roderick O’Hanlon SC, further submitted that the trial judge erred in permitting the matter to go to the jury because of the delay.

There was no explanation for the delay, Mr O’Hanlon said. “Save for one complainant who indicated ‘who would have believed us’”, Mr Justice George Birmingham had remarked.

Mr O’Hanlon said the evidence would be radically different if it had been promptly dealt with. Instead his client was left in a position where allegations were non-specific as to dates and non-specific in relation to counts.

He further submitted that some of the complainants admitted to having received counselling in respect of what had “allegedly occurred” but the defence were refused access to notes of those sessions.

Counsel for the DPP, Anthony Sammon SC, had said the case was extensively canvassed, there had been a bail application by Barry earlier this year which was refused.

Mr Sammon described the approach taken by Barry as: “if you can’t defend yourself on the facts, you attack the process”.

Accused of raping teenager 27 years ago