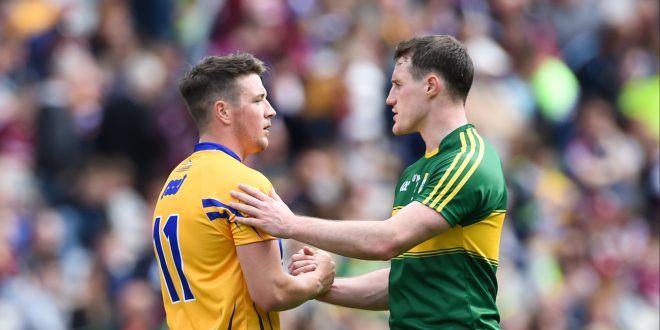 Keelan Sexton of Clare and Mark Griffin of Kerry following their quarter final against Kerry at Croke Park. Photograph by John Kelly.

RTE’s Gaelic games correspondent Marty Morrissey, a proud Clareman, will always be associated with the comment “there won’t be a cow milked in Clare for a week”.

The occasion is being recalled this week and is sure to be mentioned many times in the coming weeks, as the 25th anniversary of Clare’s Munster Senior Football Championship win over Kerry of 1992 will be celebrated.

As Doonbeg’s Gerry Killeen sent over the insurance point in Clare’s 2-10 to 0-12 victory over the men from the Kingdom on that memorable July day in the Gaelic Grounds in Limerick, match commentator Morrissey uttered those words.

This Sunday afternoon the same counties do battle, this time in the championship semi-final and, as was the case 25 years ago, Kerry carry the favourites’ tag. The winners of Sunday’s game will contest the provincial final on July 2, when the provincial council will honour the members of the 1992 Clare panel.

It is already confirmed that the opening game on the final day programme will be a Clare v Kerry contest, as the minors from these counties clash in the provincial decider. The Clare minor team is managed by one of the stars of the senior win from ’92, Seamus Clancy, who became the county’s first and only football All-Star later that year.

It would make it a very special occasion if the seniors from the Banner County qualified for the senior final this year and while every championship campaign throws up a number of shock results, a Clare win on Sunday would represent a shock of huge proportions.

Kerry are the current national league champions, having beaten Dublin in the final earlier this year and that result has seen them installed as the team most likely to dethrone current All-Ireland champions, Dublin, come September.

That said, Clare have reason to approach the game with confidence. In recent seasons, a number of Clare college teams have made progress in provincial competition, not least St Flannan’s, where one of the football coaches is current county senior captain Gary Brennan.

In the inter-county U-21 championship this season, it’s fair to say that Kerry’s stiffest test in the province was provided by Clare, while the minors are through to the provincial final for the first time in 23 years.

From a Clare point of view, there are a lot of similarities with 1992. Back then, the John Maughan-managed Clare went into that championship campaign after good progress in the league over the previous year.

They go into this Sunday’s game after some good league campaigns, which have seen them promoted from Division 4 to Division 2, where they will again compete next season. Last summer, Colm Collins’ squad enjoyed a great run in the championship through the qualifiers, which saw them go to the quarter-final in the All-Ireland race.

That run has whetted the appetite of Clare fans, who are looking for further progress this year and there is huge interest in how Clare will do. While the team deserved their first-round win over Limerick, they struggled throughout the second half and were a little fortunate to hold on at the death. They readily admit that they will have to show a big improvement on that performance if they are to have a chance of troubling a Kerry side that will be without Colm Cooper for the first time in more than a decade.

To be involved in occasions such as this inspires players to give so much of their time to training. Kerry may be the dominant force in Munster football but the so-called weaker counties in the province have shown that they can put it up to the major powers. Clare and Tipperary have shown in recent years that they have made a lot of progress. Waterford almost caused the shock of this campaign in the opening round against Cork, when they were unlucky to lose by the narrowest of margins. To many, it may seem an outrageous suggestion but wouldn’t a Clare v Tipperary provincial senior football final give a huge boost to a game that has received a lot of criticism in recent times?

A Clare win on Sunday would be a huge shock but the men of ’92 delivered when they were underdogs. Twenty-five years on, it’s high time to repeat that achievement and few would begrudge players such as Martin McMahon, Joe Hayes, Gordon Kelly, Cathal O’Connor, David Tubridy and team captain Gary Brennan a Munster final appearance next month. It’s a tall order but it was in ’92 also.

Clare footballers are bidding to beat Kerry in a Munster Championship game for the first time since 1992.
Previous Footballers can’t switch off against Kerry
Next Preparing Lough Derg Blueway