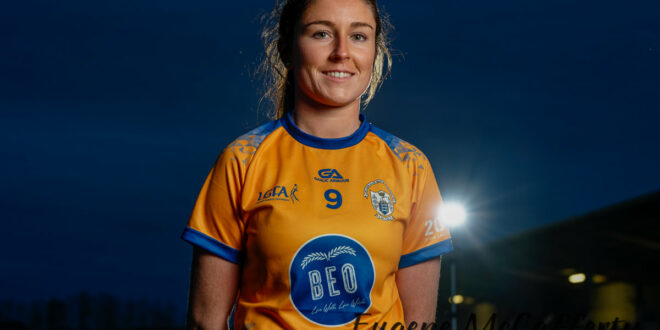 It has been an eventful 2020 for Orla Devitt, and the Eire Óg clubwoman is hoping to cap it off with an appearance in the All Ireland ladies intermediate football final.

This year saw Devitt begin a new job working Revenue in Limerick, but little did she know that the outbreak of Covid-19 meant that the role would change almost immediately.

The UCC graduate was redeployed within a week of starting in the role to help with Covid-19 contact tracing, and while there was some respite and a return to regular work as case numbers fell, the spike over recent months meant that the call came once more as the workload increased.

“It was hectic during the summer when the case numbers spiked and there was a shortage of contact tracers so we were fairly busy, It is calming down a bit now and they have hired more people to work on it so the workload is getting spread around that bit more evenly” she explained.

The Ennis woman had no hesitation in putting the shoulder to the wheel for the effort when called on, and felt that she was in a fortunate position to still have regular work to go to when so many others were on unsteady ground.

“It was just a case of go and do it, and it is great to still be able to get out and go to work and keep that routine. It works well with football too because you work from 9pm to 5pm and then you have your training to go to so you can plan out your meals or recovery work as needed. Up until March, I was working with a food company in Naas, and I was one of the last ones to be taken on there so the way things worked out, I may not have had a job if I was still there. I would also have been caught in Naas then for the lockdown so it all worked out well thankfully” she noted.

Securing a job closer to home also had its benefits in how Devitt was able to approach her intercounty duties, with the long commute up the M7 being something she found had been taking its toll.

“I was travelling up and down for training so that was tough enough because I found that being on the road as much as I was got fairly draining. I found there was a big difference in terms of how tired I would be facing back up the road again after a weekend at home. Facing that journey would be the last thing I wanted to do on a Sunday evening. I was coming down home on Friday and going straight to training so on Saturday I would be wrecked, particularly if there had also been the travel for a midweek session. I found a big difference in myself since I moved closer to home in that I am not as tired and have that bit more energy to put into it” she outlined.

Devitt has played a key role in the middle third in Clare’s 2020 campaign, and is hopeful they can continue the journey against a dangerous and familiar opponent.

“It is brilliant to be here. After losing that first game, we were expecting Kildare to be the ones to go through, so it was a great relief after the game the last day to find out we had made it. It is great to be at this stage now and we are only 60 minutes away from Croke Park hopefully. We can only look at it as another game and try not to get wrapped up in anything else. Meath are going to be a really tough opposition and the fact that they have lost the last two All Ireland finals in a row means that they will really gunning for us now to make sure that they get that chance to win that title. We met them two years at the quarter final stage and played them in the league this year too so we will know each other well” she said.

She has also been ever present under James Murrihy’s watch in his three years in charge, and she feels the fact that so many of the squad have stayed on during that time has helped them to develop to a strong level.

“With the lads we have involved with us this year and the amount of work and preparing they do behind the scenes, we have not gone into any game feeling unprepared. They have a wealth of experience of playing top level football so we have had a lot of analysing work and all that done coming into all our games so hopefully we will have that sorted for this weekend. The amount of girls who have stayed on over the last three years is great to see. You would often find that players drop off a panel to go travelling or other reasons but there has been very little turnover of players under James for the last three years which is great to see. Everyone is interested in staying involved and that has really helped to keep things at a good level too” she noted.

Devitt also feels the social element that sport brings is an important factor in maintaining normality in such strange times, and outlined that the positive atmosphere in the camp is something she hopes can continue reaping rewards on the field.

“It is great to be getting out in October and November when the evenings are getting dark. There is not much else to be at so it is great to be able to go out training under lights. If we were not doing this, there would not be much else to do other than go for a walk. The gyms and everything are all closed so it is a good release to have at the moment and the fact that you are meeting people gives it that social element too so you can have the craic with the girls. There is also still that routine with training and games so it gives that sense of normality in strange times. There was a great buzz after the Sligo game and everyone now is coming to training with a real purpose and just cannot wait to get out there now at the weekend. It was also great to get two more weeks of training with the squad particularly during the current lockdown. It really kept us ticking over so it is great to have that and the atmosphere around the place is brilliant so we are just really looking forward to the weekend now” she said.

Previous Championship Corner With Colin Ryan
Next Gardai seize €60,000 worth of drugs and cash