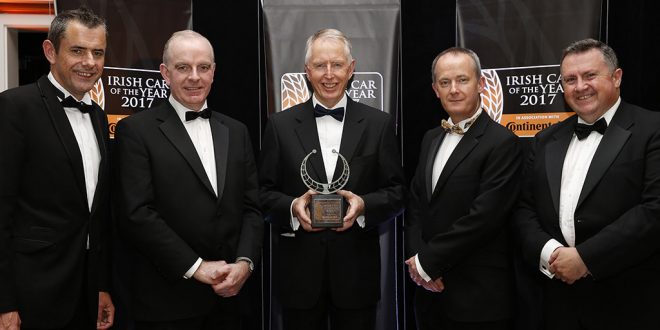 The Irish Car of the Year Awards in association with Continental tyres took place on Thursday night, October 27, at the Powerscourt Hotel, Enniskerry.

Mercedes-Benz took the top award with their E-Class and also a category win with the C-Class Coupé, crowned Irish Medium Car of the Year 2017.

ICOTY Committee member John Galvin “We’ve had 40 years of Irish Car of the Year and the E-Class is an exceptional winner.”

Tom Dennigan of Continental Tyres said about the awards “Continental is delighted to be associated with Irish Car of the Year, an event that continues to be the highlight of the motoring year.”

Stephen Byrne, Chief Executive, Mercedes-Benz in Ireland, said: “We are honoured to win the Irish Car of the Year 2017 award. This accolade bestowed by Irish motoring journalists is a recognition of the advanced technology and features to be found in the new generation E-Class.”

The category winners were all in the running for the top honour with the judging panel of close to 30 journalists electing E-Class by a landslide margin.