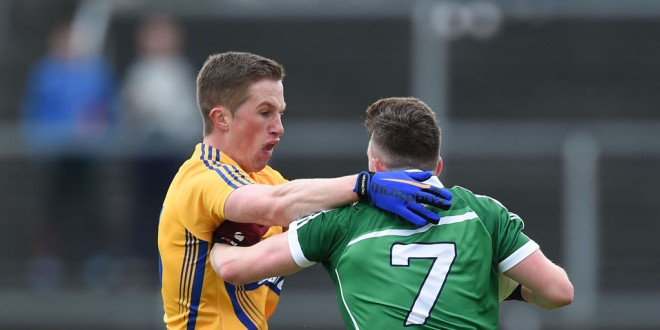 Eoin Cleary in action against Limerick.

Injury-hit Clare can compete with Cork

IN recent weeks, Clare football supporters have had to brush up on their knowledge of cruciates, dislocations, groins and shoulders, such has been the spate of injuries that have afflicted the county team.
Clare were without key players David Tubridy, Shane McGrath and Enda Coughlan for their two-point win over Limerick three weeks ago, while during that game Shane Brennan, brother of team captain Gary, left the field with a collar bone injury, which will sideline him on Sunday.
The bulletins have not been great since then either. Podge Collins snapped his cruciate playing club hurling for Cratloe against Ballyea last Saturday week in Cusack Park and his absence leaves a huge void in the Clare attack.
If Tubridy, McGrath and Coughlan are still not match fit, the collective injuries leave Clare with significantly depleted options in attack. Kilmihil’s Martin O’Leary, who plays hurling for Ballyea, dislocated his shoulder against Cratloe and is also out this weekend.
On the plus side, Cratloe’s Cathal McInerney is back fully fit and could have a key role to play in Cork. A renowned free-taker and noted for his ice-cool temperament, McInerney scored two critical points when introduced as a substitute against Limerick.
Clare minor captain, Keelan Sexton supplied him with a superb pass for the second of those points and as recently as last Friday week, Sexton scored 0-12 in Kilmurry Ibrickane’s facile Division 1 league win over their neighbours, Doonbeg. So while Clare’s options may have receded somewhat, given the number of injuries, players such as McInerney, Sexton and the very experienced Rory Donnelly offer viable and potent options up front.
Donnelly, who lives in Dublin, couldn’t commit to Clare for the league but returned to the panel for the Munster Championship. Brought on against Limerick, he underlined his class, putting over two invaluable points from play.
Miltown Malbay’s Eoin Cleary made his first championship start against Limerick and chipped in with two points. Cleary featured from the bench in all five of Clare’s 2014 championship games and that experience will stand to him in Páirc Uí Rinn on Sunday.
In last year’s championship, Clare were competitive against All-Ireland champions Kerry in their opening round of the Munster Championship in Ennis. Prior to that, they beat Waterford in a replay, before knocking out Carlow and eventually losing to Kildare by a point in Ennis.
However, travelling to Cork presents Clare with a huge task. The NFL Division 1 finalists have been playing the best teams in the country this season, while Clare did well to retain their Division 3 status with wins over Wexford, Sligo and Fermanagh.
Will Clare adopt the Longford (against Dublin) approach of going man-on-man or will they be a bit more conservative and make it difficult for Cork to cut through them?
It is likely that they will opt for a balance of defending in numbers but doing their utmost to break forward in equal numbers if they turn over possession. Even bearing their injury concerns in mind, Clare have the forwards to tot up a decent score but must ensure that they keep it down at the opposite end.
Cork and their supporters will expect to pull away as the game develops, while Clare’s aim will be to stay in the game for as long as possible, thereby injecting some doubt into their opponent’s mindset.
In their last competitive match, Cork were hammered, 1-21 to 2-7, by Dublin in the NFL Division 1 final. Reaching the final was an achievement in itself but losing by 11 points took the good out of it for Cork.
Although they have some top-class footballers in Brian Hurley, Colm O’Neill, Daniel Goulding and Michael Shields, Cork appear to have a soft underbelly. In last year’s Munster final, Kerry hammered them 0-24 to 0-12 in Páirc Uí Chaoimh, while Cork only scraped beyond Tipperary in the semi-final.
Clare have every chance of competing with Cork on Sunday, as long as they get the basics right, don’t concede goals, particularly early in the game and take their own chances.
Although injuries have weakened the depth of their panel, the Clare forwards are capable of kicking a competitive score, as long as Gary Brennan and Cathal O’Connor at least break even around the middle.
Defensively, Clare are more suspect, particularly when teams run at them in numbers. Clare defenders tend to get dragged out of position and when an opponent breaks the first tackle, Clare are liable to be opened up. They will have to be defensively sound on Sunday and that starts with Clare knowing what they are doing defensively from the half-forward line back.
If Clare can press Cork high up the field, it will give the Clare defenders an added, yet invaluable, second or two to get their bearings.
There is a big performance in this Clare panel. At the very least, they are capable of living with Cork until the 50th minute and if they can do that, who knows what might transpire?
Brilliant in the first half against Limerick, Clare will need more of that from Gary Brennan and up to 12 of his colleagues. However, predicting a Clare win would be purely based on illogical optimism. Cork are a Division 1 team, Clare Division 3.
What Clare can do, though, is produce a 70-minute performance in which they have a high tackle count, don’t concede needless frees, retain their own kick-outs, take most of their chances and remain composed whatever happens.
If they do that, they will at least compete with Cork and enter the subsequent All-Ireland qualifiers with substance, backing the belief that they can target a last 12 appearance.