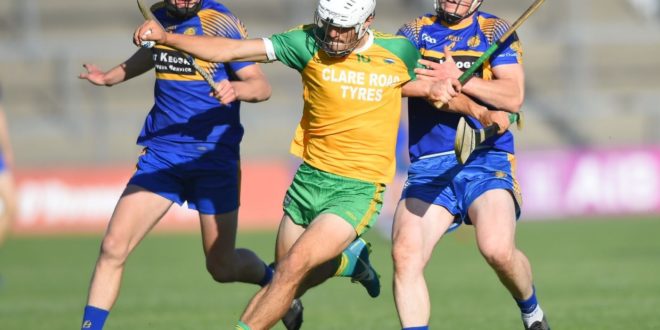 Aidan McCarthy under pressure from the Newmarket defence. Pic by John Kelly

Inagh-Kilnamona produced a composed display to see off the challenge of Newmarket and book their place in the last eight of the Clare SHC.

Aidan McCarthy’s first half goal helped him to a personal tally of 1-10 for Fergal Hegarty’s men as they became the first team into the hat for the quarter-final draw.

Inagh-Kilnamona’s tactic of opening up the play with diagonal attacks along with Shane McInerney’s protection of the full-back line helped Fergal Hegarty’s charges to lead 0-5 to 0-2 at the opening water break.

Aidan McCarthy was unerring from placed balls with three to his name while his brother Jason and young star Kealan Guyler were also on target in the opening quarter. Newmarket had Colin Ryan frees to thank for their two scores, and it looked as if last year’s beaten semi-finalists were well on top.

A change of approach from the Blues saw Colin Guilfoyle moved to operate around the middle third and it worked as they began to get a grip on proceedings in the closing stages of the half. Inagh-Kilnamona extended their lead to 0-9 to 0-3 with the McCarthy brothers, Evan McNamara and David Fitzgerald all finding the target, but with the wind at their backs Newmarket began to mount a comeback.

The battle of the middle third began to swing their way with Stephen Kelly’s aerial threat on the edge of the square giving them the direct outlet. Eoin Guilfoyle, Niall O’Connor, Eoin Hayes and two more Ryan frees saw them trail by 0-9 to 0-8 in the closing stages of the half. Inagh-Kilnamona needed a score to finish the opening period and it arrived from David Mescall to see them two points to the good at the break with the wind to come.

By the time the next break came, Inagh-Kilnamona had built a ten point lead thanks in part to Aidan McCarthy crashing the ball home for the second successive championship game. 1-5 without reply put the result beyond any real doubt with only Colin Ryan landing a free for Newmarket. McCarthy punished any indiscretions in the Newmarket defence while Hegarty and Guyler’s movement in the inside line caused constant problems. At the final water break, it was Inagh-Kilnamona 1-16 to 0-9 ahead.

Newmarket were not going to go down without a fight and a run of 1-2 unanswered was sparked by Colin Guifoyle’s whipped finish to leave five points between the sides with time running out. It was as close as they got though as the Combo closed out the game to move into the draw for the last eight.

Previous Revenue seize cannabis worth over €80,000 at Shannon Airport
Next “Is it a second wave? It’s hard to know”