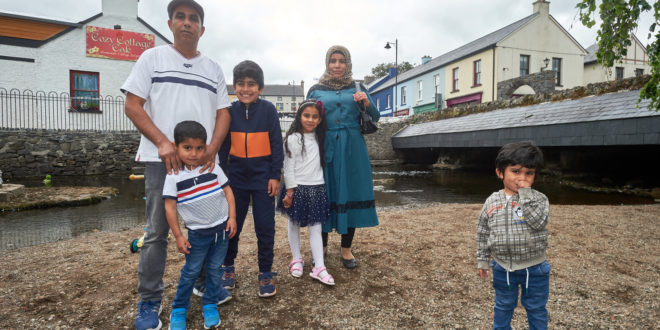 Ali Alabbas and his wife Douma Alahmad, originally from Syria, with their children Yousef, Hasan, Shaza and Adam at Sixmilebridge. Photograph by John Kelly

HAD it not been for Covid-19, Ali Alabbas would have been in Semple Stadium and Páirc Uí Chaoimh this summer cheering on the Banner.

“The first time I saw hurling was when I came to Ireland and I liked it. I’m a fan of Clare. I’ve been to a lot of places to see them play. Wherever Clare play I go, me and my son. I go with a friend who lives here in Sixmilebridge,” says Ali, a refugee who wound up in a Clare hurling heartland, after having to flee the chaos that swamped his native Syria.

Ali and his wife Douma are happy in Sixmilebridge, where they live with their daughter and three sons, who range in age from nine to two years old, with their young boy having been born in Ireland.

Due to the conflict in Syria, they arrived here as refugees, meaning they did not have to go into direct provision. Instead, they were sent firstly to Dungarvan where they received some preparation for what life in Ireland would be like, and then it was on to Clare.

Life had become quite intolerable at home, before they made the move. “There was war; you just didn’t know when the bombing or the shooting would start. It was just hell.”

More than 380,000 people have been killed since the start of the conflict there, with 11 million displaced.

Ali believes the country is very much used as a theatre of war by other countries now. “It’s still very difficult. It’s a fight with Russia, America and Iran. There are these different countries and we’re caught between them.”

It took quite a long time for his family to finally get the chance to leave. “We moved several times, four or five times before we got to Lebanon and then we came to Ireland.”

Very cheerful and friendly when he spoke to The Clare Champion, he says his family have found contentment here.
“I’m happy here, my kids are going to school and we have a house. The Government has helped me, Orla (Ní Éilí of the Clare Immigrant Support Centre) is helping me. I’m pretty much happy here.”

He jokes that the Irish climate isn’t as good as the Syrian one and he admits he does miss neighbours and friends, as well as the home he had built for his family in his home country.

However, he feels that Ireland has been very good for him, and he says the people he has met in Clare have been very open and welcoming. “The Irish people are very friendly, they are very special. They always smile and there’s no
racism or discrimination.”

While there are few negatives, he says it is hard to learn a new language as an adult, while he finds the health system very slow, having been waiting three years for an eye appointment.

Ali’s children settled in very easily, showing how adaptable small children can be. “They like it. They are doing well in school, they have friends who they play with. They learned English very, very quickly. They
practise hurling and they like it.”

He really appreciates what has been done for him over the last few years. “I am very grateful to the people of Ireland and the government of Ireland for the help they have given us. The Clare Immigrant Support Centre are helping us a lot too.”

Last Saturday was World Refugee Day, which was marked by the Clare Immigrant Support Centre at the Fair Green in Ennis.

At the moment, the United Nations High Commissioner for Refugees is running an initiative called Steps With Refugees, in which people travel distances in solidarity with the difficult journeys that many refugees have to take throughout their lives.

“We’re backing Steps With Refugees, which is a worldwide initiative. Because we knew we couldn’t gather, we encouraged people to walk where they are, send us a picture and we upload it then,” says spokesperson Orla Ní Éilí.

“We had a gathering of 15 people, properly distanced, at the Fair Green, who did a few laps in solidarity with refugees worldwide. Unfortunately, we couldn’t have everyone together. We want to show solidarity with the terrible journeys that many people have to take in their lives,” she concluded.

Owen Ryan has been a journalist with the Clare Champion since 2007, having previously worked for a number of other regional titles in Limerick, Galway and Cork.
Previous O’Callaghan leaving Shannon Heritage
Next Breaking-€6.1 million for Shannon Airport 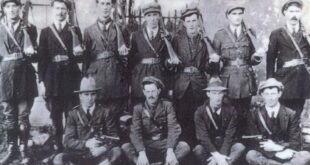