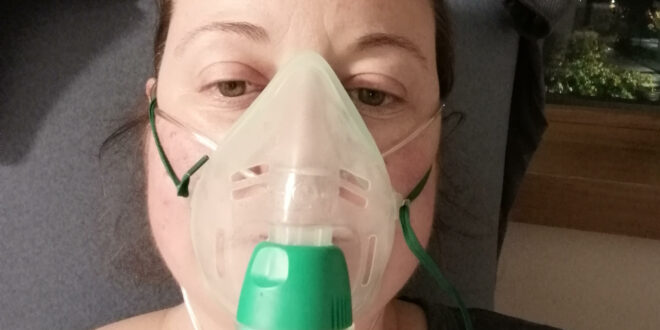 Quilty paramedic, Paula King Delaney, who thought she would die after contracting a severe bout of Covid-19.

A WEST Clare paramedic has revealed she thought she would die as she battled to breathe in an intensive care unit after contracting a very severe bout of Covid-19.

Paula King Delaney (41) is still being treated for the virus in Tullamore Regional Hospital after she tested positive on September 14.

While the Quilty mother-of-two understands people are frustrated with the extent of ongoing Covid-19 restrictions, she has appealed to everyone to comply with all public health guidelines and adopt a healthy respect for the virus.

“Covid-19 doesn’t care who you are and what age you are or what condition you have or haven’t got. It very dangerous and vicious.

“I would urge everyone to do what they can when they can to minimise the spread of the virus. I am not judging anyone, I just want people to protect themselves.

“I wouldn’t want anyone to go through what I am going through ever. I wouldn’t wish it on my worst enemy. The messages of support I have received have been amazing for my mental health while I was stuck in hospital for the last three weeks.

“If I could spare one person this experience, it would be worth it for me,” she said.

The long serving paramedic has thanked her GP, doctors, nurses, physiotherapists and staff in Tullamore Regional Hospital for saving her life.

Born and raised in Quilty, Paula has been living in Offaly for the last 20 years and has resided in Ferbane in recent years. Her brother, Keith King has won numerous medals with Kilmurry Ibrickane GAA club.

Next January marks her 17th year working as a paramedic for the National Ambulance Service (NAS). She is married and has two children Lorcan (13) and Erin (11).

On September 10, Paula complied with public health guidelines by placing herself in isolation after receiving a phone call, which confirmed she was a close contact of a Covid-19 case.

Two days later, she was tested for Covid-19 and got a negative result. However, the following day she started to develop symptoms and got a second test, which confirmed she had the virus.

Her first symptoms were burning in her throat and chest in what was a very strange sensation as it wasn’t like a sore throat.

She started to develop pains in her ankles and legs and found it hard to get up and walk. After spending seven days in isolation, she found her breathing was getting progressively work as the week went on.

While she had a slight cough, it wasn’t as bad as she would have expected. As her breathing continued to deteriorate, Paula contacted her GP who referred her to Tullamore Regional Hospital.

After being admitted to the ED, doctors discovered her lungs were in a very bad condition thanks to a chest x-ray and CT scan.

Two days after being admitted to Tullamore Regional Hospital, she had to be sent into ICU as her oxygen levels had dropped quite low.

“It hurt to breathe. To take a breathe in was painful. I wasn’t expecting the physical pain that I felt, I didn’t realise that was part of it. The overall severity of it from my bones to my chest – the pain was horrendous. I didn’t want to think it was that serious because I had two children at home and I didn’t want to leave them.

“It was a very traumatic day being moved into ICU but I obviously needed to be there as I was suffering. I went downhill from the day I was into ICU until Friday, September 25. My breathing became very bad.

“If I lay back in the bed, I couldn’t breathe. I had to sit upright to get air moving in my lungs.

“On Friday morning, the doctor decided I had come to the stage where I needed to be put on a ventilator. As a paramedic I had more knowledge than most people, I knew what was coming and how serious it was.”

She recalled Thursday, September 24 was particularly bad as she was sitting on the side of the bed with two nurses trying to breathe.

“I felt I could die, I was that sick. It was the first time in my life I could ever say that.

“It was scary. My husband, Mark got a phone call on Friday morning to tell him I was very bad and I was going on a ventilator. I can’t imagine what he went through because I wasn’t speaking to him and I didn’t see him that day. I wasn’t able to speak on the phone.

It was only afterwards I heard that he got the phone call. He was so upset and devastated as well. Friday for me was a bit of a blur. When I got really bad, I wasn’t able to physically hold myself up. I had no energy, I was so weak and so sick,” she said.

Paula recalled she got a lot of antibiotics the previous day and her GP had obtained anti-viral medication as a last-ditch effort to try and save her.

She remembered sitting on the side of the bed on Friday with an ICU nurse placing her knees in her back to try and keep her upright while a physiotherapist was on his knees trying to keep her from falling down so oxygen could circulate around her body.

Two anaesthetists were standing at a window making gestures to try and help her to keep breathing.

“I couldn’t even look, I couldn’t move my eyes. I had no energy. I heard my doctor behind me asking for the medication. I was done. I had nothing left to give but they fought for me and saved me.

“They kept me in an upright position until they could get the anti-viral medication into me. I ended up in a chair beside the bed for 48 hours slumped over a hospital table with two pillows to try and keep my airways open.

“If I laid down on the bed, I would have to go on the ventilator. They couldn’t give me painkillers because my breathing was so bad, it would have stopped my breathing. I was spared a ventilator at the last second because they physically held me in and upright position to let the mediation into a drip.

“Within an hour of getting the anti-viral medication, I started to improve. I had to sit upright in a chair for 48 hours to keep my lungs moving. I got no sleep during my seven days in ICU, I was suffering every minute to try and keep my lungs moving,” she said.

Despite of her paramedic training, Paula thought if she got the virus, it would be like the flu before adding “never in a million years if someone told me I would end up at death’s door in ICU would I have believed them”.

She never realised how severe the virus can be for some patients.

“I am discovering this week my body has been damaged by Covid-19. I am still on oxygen. The doctors are hoping to get me off of it going home but they don’t know if they can.

“My lungs may be damaged and I have to go to another hospital for assessment. There is a slight chance I may need oxygen at home for quite a while if not forever. I am also a diabetic, which I wasn’t previously.

“I am very grateful that I am alive. I hadn’t any underlying conditions before I came into hospital and I wasn’t on any medication.”