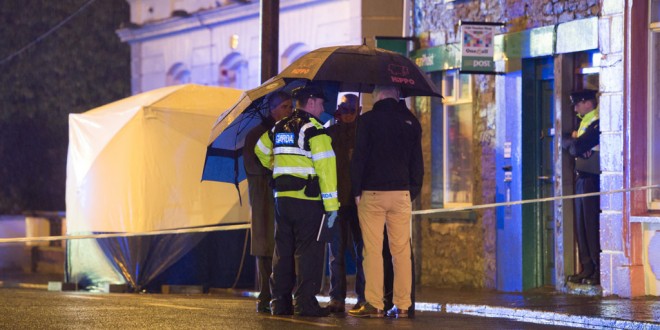 Gardaí at the scene in Kildysart on Wednesday. Photograph by John Kelly.

The tragic deaths of a South African couple in Kildysart on Wednesday night has sent shockwaves through the small community.

Senior garda sources have confirmed that the woman, aged 27, and her husband, aged 44, “died by violence” but are not in a position to state the cause of death until post mortem examinations have been carried out. The couple had been living in Kildysart since March of this year.

Gardaí are treating the investigation as a tragic domestic incident. They are not looking for a third party but are anxious to hear from any witnesses or anybody who may have been in the general area between 6pm and 7.30pm, when the tragedy unfolded on Kildysart’s Main Street.

The woman was seen running into the street by a garda, who was attending the scene of a fire at a local hardware shop. She collapsed on the street and despite efforts to revive her by fire services personnel, who were already at the location, she was pronounced dead at the scene.

He husband was later found injured in the house they rented in Kildysart close to the post office. He was also later pronounced dead at the scene.

The couple have two young children, aged two and three,  who were uninjured, and they are being looked after by locals.

The Garda Technical Bureau are due to attend the scene on Thursday morning, as is the Assistant State Pathologist. The bodies will remain at the scene pending the pathologist’s arrival.

The main street will remain sealed off by gardaí overnight and traffic is being diverted from the area.

To assist in enquiries contact Kilrush Garda Station or the Garda Confidential Line on 1800 666 111.