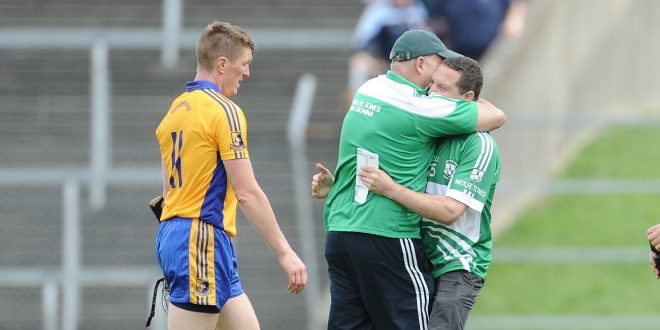 The shock results in the 2016 Clare senior hurling championship continued on this Sunday afternoon as the defending champions, Sixmilebridge were knocked out of the title race by their neighbours Wolfe Tones, last year’s intermediate winners.

The margin of victory was only a point (2-13 to 0-18) but the Shannon side were deserving of their success as they showed the greater hunger for success throughout the contest.

Inter county players Aron Shanagher and Aaron Cunningham were the goalscorers on a day when the winners were  two points clear at half time, 1-8 to 0-9, Shanagher’s goal having come just on the half hour mark.

With the lead back to a point Cunningham struck for his goal nine minutes into the second half and while the title holders replied with a couple of great points, the closest they got to the winners was a point.

In the opening game at Cusack Park, Cratloe booked their place in the quarter finals when they defeated Clarecastle on a final scoreline of 3-18 to 2-15.

Goals from Cathal McInerney and Conor McGrath helped the winners to a four point half time lead at half time when the score was 2-9 to 0-11. The margin was still the same at the three quarter stage after each side had added three points to their half time tallies but then Cratloe hit 1-5 without reply to go twelve points clear with the score at 3-17 to 0-14.

The magpies finished strongly and hit 2-1 in the three minutes of injury time that followed but, overall, Cratloe were deserving winners.

The last of the third round games was played in difficult weather conditions at Sixmilebridge on Sunday evening when Ballyea emerged with a one point win over Clooney-Quin. the game looked to be heading for extra time after Fergal Lynch struck for a Clooney-Quin goal with two minutes remaining. Two minutes of ‘injury time’ were signalled and in the first of these Tony Kelly converted a free from midfield to give his side an 0-18 to 3-8 victory.

The eight quarter finalists are Clonlara, Crusheen, Eire Og, Feakle, Tulla, Cratloe, Wolfe Tones and Ballyea and the pairings will be decided on Monday night.

O’Callaghans Mills, Clarecastle, Sixmilebridge and Clooney-Quin will compete for the senior B title while Kilmaley and Newmarket must play off to determine who will drop down to intermediate level for next season.

The eight quarter finalists in the intermediate championship are also confirmed after the week-end’s action. They are

Meanwhile the junior B championship has reached the semi-final stage and the four remaining teams are Wolfe Tones, Tubber, Clooney-Quin and Newmarket