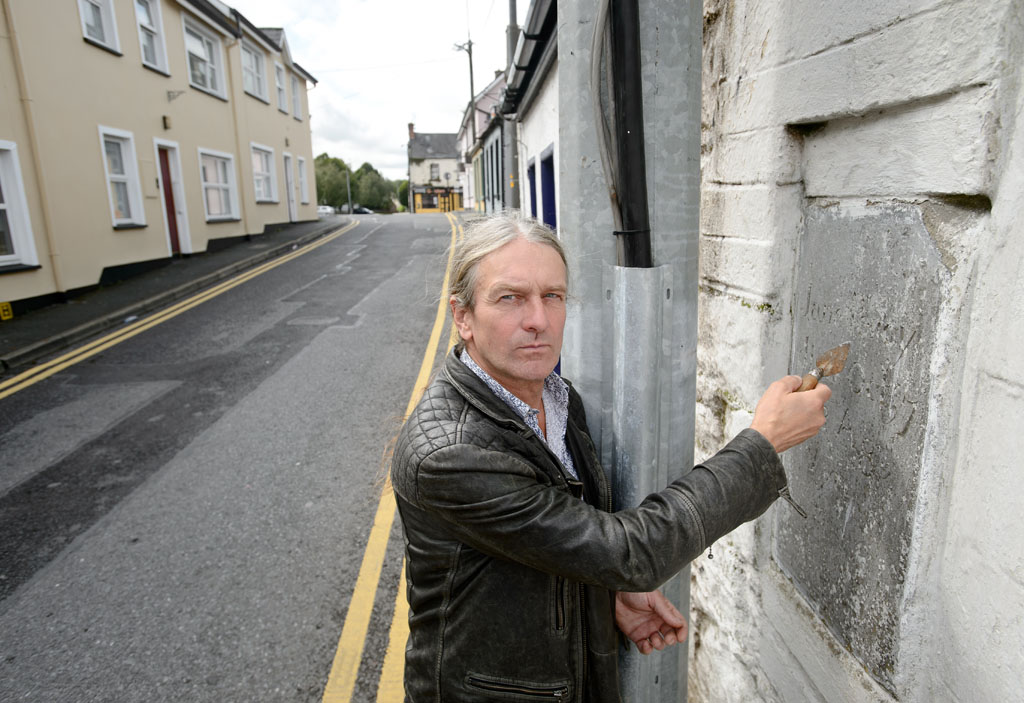 Graham Hull with the gravestone of Jane Percy on lower Drumbiggle Road. . Photograph by John Kelly.

Archaeologists have made the discovery of human bones at two locations on the south side of the historic core of Ennis, including just outside The Clare Champion offices.

The bones included those from a third-trimester foetus, eight infants aged from newborn to two-years-old and three juveniles aged between two and five-years-old.

Ballinruan-based archaeological consultancy TVAS (Ireland) Ltd undertook the archaeological monitoring of the trenches for water pipes in the county town.

Archaeologist Graham Hull explained that the bone was disarticulated, found as separate pieces not as complete skeletons, and was within a foot or two of the modern road surfaces.
“The bone found in Barrack Street was almost literally on the doorstep of The Clare Champion,” said the archaeologist, who spent a number of months working with Ward and Burke Construction; the contractors that dug the trenches and installed the new pipes.

He assumed the Barrack Street bone would be “relatively modern” but was surprised at the results of radiocarbon dating of a tooth sent to Queen’s University Belfast. After a number of months, the results showed that the person died between the early 14th and the mid 15th century.

“The medieval date strongly suggested that there were burials taking place in this part of Ennis hundreds of years earlier than anyone thought.”

Brian noted that the triangle of land at Barrack Street was used for fairs before 1641 and it is known that medieval fairs commonly took place in graveyards.

Human bone was found nearby at the junction of Barrack Street and Gaol Street (now O’Connell Street) in 1902 and was reported by the Clare Journal of July 31.

“Discovery of Remains in Ennis. On Wednesday while some workmen were carrying out excavations in connection with sewerage and sanitary works for Mr Leonard Costelloe, plumber, in Upper Jail St. leading into Barrack Square, they came on a quantity of human remains and a number of small bones, with the remains of a coffin. They seemed of great age.”

Further human bones were found in the pipe trench at the Kilrush Road and Carmody Street crossroads. These were found with pottery and glass sherds that together with map evidence date them to more recent times; probably the 17th to 19th century. It is known that a graveyard was located there from the 17th to early 19th century as a burial ground for Ennis’ poorer people, who couldn’t afford to be buried at the friary. The Garraunakilla (Garrán na Cille church grove) graveyard is shown on old maps of the town and was closed in the 1830s when Drumcliffe Cemetery was opened. Carmody Street and new housing destroyed much of the Garraunakilla graveyard in the second half of the 19th century.
Bioarchaeologist Dr Mara Tesorieri, who is currently writing a book on medieval Irish and British health based on the analysis of human skeletal remains, examined the bone from both locations.

Dr Tesorieri said that there were at least 22 people represented by the remains, including five adults and 17 children.

“Some of the children suffered from malnutrition, with evidence of possible scurvy (Vitamin C deficiency) and anaemia present in the remains,” Dr Tesorieri said. Osteoarthritis and trauma in the form of a healed fracture to the left distal radius (forearm just above the wrist) were also present.

Local man Larry Brennan of the Ennis Roots Society, who has written a booklet about the Garraunakilla graveyard, said, “The archaeological information will throw further light on the history of Barrack Street, The Market and Garraunakilla.”

The archaeological report on the work is available on Graham’s website www.tvasireland.ie and an article is to be published in the journal of the Shannon Archaeological and Historical Society, The Other Clare, next year.