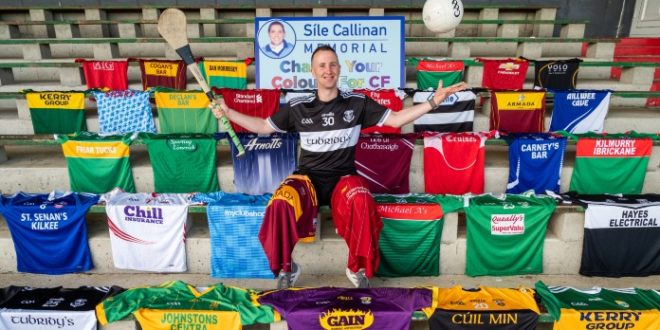 Kilmurry Ibrickane man Micheál Talty promoting the Change You Colours For CF challenge to raise funds for the Clare CF Support Fund and The Julian Benson CF Foundation in memory of his fiancé Síle Callinan who died in 2017 from Cystic Fibrosis, aged 26. Pic by John Kelly

“A life that touches others goes on forever”

When Síle Callinan passed away in March 2017, this mantra was one which brought a form of solace to her wide circle of family and friends.

The Cooraclare native lost her battle with CF at 26 years old, and since her passing her legacy has been ingrained in sport and CF campaigning with the establishment of the Síle Callinan Memorial Ladies Football 7’s tournament.

Síle’s fiancé Michéal Talty along with the Callinan family have been the driving force behind the hugely popular event, with GAA celebrities like Cora Staunton and Joe Brolly among the names who have visited the tournament since its inception.

Covid-19 restrictions meant that the tournament could not be held in its usual format in 2020, but Michéal was determined that the core values of the event could still be maintained, albeit in a much different way.

The Change Your Colours for CF initative has seen sporting heroes across Clare and beyond swallow their pride and don their rivals colours all in the name of supporting CF services. Clare senior football captain Eoin Cleary along with ladies captain Ellie O’Gorman rowed in behind the cause as they swapped Miltown and Kilmihil for Kilmurry Ibrickane and Cooraclare respectively, while intercounty stars Gary Brennan and Tony Kelly were decked out in the Cork and Kerry colours.

Michéal outlined that it is something people have really taken to and is thrilled with the support received so far.

“Raising money for CF services is a key element of the tournament each year so Change Your Colours for CF is helping to bring people together even though it is in a virtual sense. It is great to see everyone having fun with it and it is raising good money for our two chosen charities this year which are Clare CF Support Fund and the Julian Benson Foundation. There are lots of great charities around and we saw the support they got during lockdown in particular which was great because they all need help. We wanted to try something different so we came up with the idea of changing your colours by wearing whatever jersey you wanted to and then nominating others to do the same. There will be a draw at the end where people can win a set of jerseys for their club along with lots of other prizes, but the fun element is what is really driving this and it is great to see the smiles on peoples faces” he said.

June 2020 would have seen Síle celebrating turning 30, but plans to mark both her anniversary and milestone birthday had to be postponed due to Covid-19. Michéal admits it was tough to not be able to gather friends and family for those occasions.

“We were not able to do anything for her anniversary mass this year because it was right around the time that everything was cancelled due to Covid-19. We were looking ahead to meeting up in June to mark her birthday and getting family and friends together for that. It is a tough one in particular because at the moment, 30 is the average life expectancy for a person with CF. It is a sobering statistic and one of the reasons why CF charities need the help right now. We need to support people with CF and try to improve their lives right now. Things have been getting better over the last few years, and even since Síle died, some life changing drugs have come on the market and life expectancy is going up year on year. The man behind one of our chosen charities this year, Julian Benson, has really bucked the trend on that because he has CF himself but he is still going strong so he is an inspiration for what the future could be. Thankfully the drugs that are available now should mean that children born with CF could be healthy into their 50’s but even that is not good enough. We need it to be cured eventually but in the short term all we can do is try to help as many people as possible and try to make a difference in their lives, particularly those in Clare. There is fantastic work being done by Clare Cystic Fibrosis along with the likes of TLC4CF and the Drennan family with the Truck Run for Katie. The work those people have done is incredible and they have really inspired us to try and help make that difference” he stated.

Síle was a well known sportsperson and represented both club and county at underage and adult level. Her sporting prowess was recognised at her former secondary school when she was chosen as the female sports star of the year in her Leaving Cert year at St Michael’s Community College in Kilmihil. She was also instrumental in fundraising efforts, and held a hugely successful waxathon event which raised over €6000 for CF services in 2016.

Micheál outlined that while Síle lived with CF, it was never a condition that shaped her life.

“She was able to live her life in the way that she wanted to. She got all her qualifications and held down a full time job in Cooraclare as a primary school teacher. We went everywhere together and did everything together and she never let it get in the way. As time went on, she had to put in more work behind the scenes. Her working day would start at 6.30am so she could have time to do her lung exercises and clear her chest so she could be right for heading off out the door to do her days work. Once she went, she was fine for the day. She might be tired in the evening then and would have to take that time again, but she really found that exercise helped in building her lung function so that is why sport was so important. Síle would not have wanted a fuss and most people did not know she had CF, and that how is she wanted it. She just wanted to be Síle the schoolteacher from Cooraclare. Anytime anyone asked how she was, the answer was always the same: I’m grand. That is the way she wanted it and she did not want that fuss. The other side of it is I saw first hand over the six years we had together what people with CF have to do just to get out the door in the morning and it would inspire anyone. Thankfully, in the last few years, it looks as if the right drugs are coming and things are starting to improve drastically which is brilliant for us to see. We know that anything we do cannot bring Síle back but there is some comfort in seeing others benefit from getting access to those drugs. It is really like having Síle smiling down on us when we see that. I had a call recently from a girl I know who gained access to a new drug which for her was like a new lease of life and for me, that was the best news I got in 2020” he said.

It is clear to see how well matched Síle and Michéal were, as his immediate answer when asked how he has been over the last few years is the same as Síle so often gave.

“You have up and down times. The 7-a-side and all we do with CF services has been an unbeliveable help to me and the Callinan family. It is keeping Síle’s memory alive and it is helping us to help others. One of Síle’s relations had a great quote after the funeral which said that ‘a life that touches others goes on forever’ and there are people that know her now that would never have known her before. It is over three years later and it is tough when you sit back and think about it. We don’t want to have to be doing this and we would swap everything to have Síle back for just one day. They say time heals a lot of things but it has been tough and we think about Síle every day. Sport and work and all that can often be a welcome distraction. 2020 has been a tough year for people with their lives turned upside down, and that is what it was like for us when Síle passed away. Everything we knew changed instantly. This year brought back a lot of those memories but thankfully we have this positive project to run for a few weeks and the fun that people are having with it is really lifting our hearts in the tough times” he concluded.

Anyone wishing to donate to the Change Your Colours for CF fund can search for Síle Callinan Memorial Tournament on Facebook or GoFundMe.