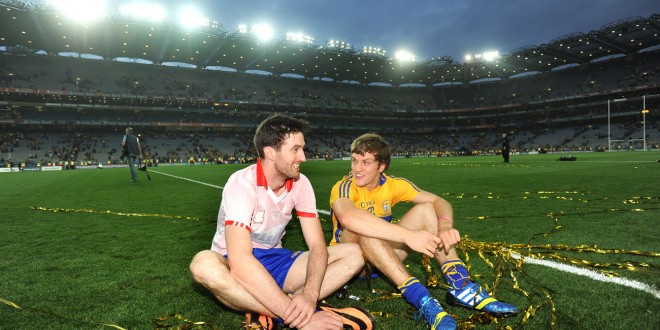 All-Ireland winning U-21 and senior star, Darach Honan, has disputed county board chairman Joe Cooney’s claim that Clare GAA did all it could to help with the medical costs incurred by him as a result of injury.

On Wednesday, Honan said, “I am still very disappointed with the way I was treated by the county board. Joe Cooney did make overtures for me to come and speak to the officers last week but I was unable to do so, because of training commitments with Clonlara U-21s [he is their team manager] and work commitments.

“I am disapponted that I wasn’t properly looked after. I went to the county board and no help whatsover was offered. On my own volition, I went to the GPA and they did help with part of the funds, for which I am very thankful,” he added.

At Tuesday night’s county board meeting, Joe Cooney had said Clare GAA did not let down Darach Honan.

“We were very disappointed with the publicity we got as regards the Darach Honan injury, his operation and the way Clare GAA treated him. I don’t know where it came from but I can tell you all that I did sit down with Darach Honan. We met with him and talked to him. He did look for funding from Clare GAA towards the operation. We all know what Darach has done for Clare GAA in the past. He was an excellent servant of Clare GAA,” the chairman said at the meeting.

“We did look at how we could fund his operation. We felt if we paid it straight from Clare GAA, we could set a precedent whereby a lot of players could come back looking for funding in the future. We did explore a lot of different options and we did secure funding through the player injury benevolant fund. There was a lot of work done.”

He continued, “We would like if people would check out more before they go to the press or social media with regard to the way players are looked after. I can tell you we did do our part to try and help out Darach and I spoke to him and met him on a number of occasions. We are happy enough that we did our utmost for Darach”.

“He did get a substantial amount from a benefit fund that was there and Clare GAA did put a lot of effort into getting that benefit for Darach,” he added, before going on to again compliment and pay tribute to Darach “for what he has done for the county”.
“He achieved a lot, both for himself as a player and what he won with this county. We wish him the best of luck. We do believe that he may not play the game again and that is very regrettable but, unfortunately, that’s the way it is. Clare GAA did not let down Darach Honan.”

Clonlara delegate Flan Mullane told the meeting, “We feel very let down by the county board or whoever. A lot of what has been said was true. It cost him four to five thousand out of his own pocket. He did not receive any money from Clare GAA up to lately. Where does insurance come in on an injury like that?”

“Could it be done now?” Mullane asked, to which the secretary replied, “I wouldn’t think so”.

“The players’ injury fund is funded directly by the GAA. It comes from contributions made by clubs, plus monies put in by provincial council, monies deducted from league games and put into the fund. GAA in Croke Park through the benevolent fund gave a donation,” he added.

When Mullane repeated that Honan was out of pocket in the region of €4,000, the secretary said, “I wonder where that information came from. The operation cost in the region of €6,000, so are you saying that it was about €10,000 or €11,000? If you go through the players’ injury fund you have to streamline the exact cost. There is another dimension to this and there was a lot of research done on it. As a matter of fact, there is an 11-page report on this which was sent to Croke Park. There is a fair share of information on that already.

“Up to the time that the injury became an issue in terms of dealing with it, you can take it all the costs were evaluated and have been evaluated by the GPA and people at that level. It would have been around the time that he had the operation and that’s why I would like to know if he was four or five thousand out of pocket, that would suggest that it cost €10,000 or €11,000. We have a letter here signed by somebody in authority and, I can tell you, I will be surprised if there is a major discrepancy. We have the sum on the letter that is signed and I would suggest that the less said from here on the better. It’s a pity that it has gone to where it is. The facts are there. Croke Park has all the facts. We appreciate what he has given to the county and I think that it would not be fair to go any further.”

Joe Cooney repeated that he had “met Darach on different occasions and I sat down with his father as well”.

“Clare GAA has done as much as it can for Darach. We are all very disappointed that he picked up that injury at a young age. We have our part done. I have no problem at any stage sitting down with the Clonlara club or the family,” he added.

Board vice-chairman PJ McGuane said, “At the present time, my club is out €8,000 for helping two young fellas to have operations. We know they are insured but the point is when you go to the consultants, you go for the operation. It’s a chicken and egg situation and I hope every club will realise this. You cannot draw down the money until you spend and you cannot have the operation unless you have the money in your arse pocket. It’s very, very simple and every club needs to realise that.

“We have been waiting for the last six or eight months and it’s nobody’s fault. Our club had to fund the operation for these people and I keep saying ‘why don’t players have voluntary health insurance’. I played football for 20 years and I was only a farmer working at home but I always had private insurance on myself. Thank God, I never had to draw it down but that was 40 or 50 years ago. All these people have money for holidays, money for everything and so have their parents but they cannot insure themselves. Our club has to pick up the slack because we have an obligation to do so for our members. It’s unfair.”