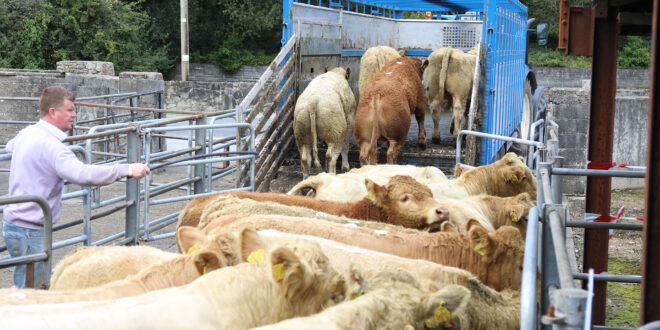 Gareth Barry from Quin loads his 40 weanling bulls which he bought in Scarriff Mart, where trade can also be done online.

HISTORY has been made at Scariff Mart, with facilities now available online as well as in the sales ring.

Since the mart facility re-opened at the start of this month, brisk trade has been reported with strong prices and many satisfied farmers as they adapt to changing times and changing technology.

Councillor Pat Burke, a board member of Clare Marts and member of the advisory committee for Scariff Mart, said that Covid-19 had forced through a number of changes which had been in the pipeline for a number of years before the pandemic.

“We had been looking at an online sales facility in Clare Marts for a number years,” he explained. “We had been out in France and seen systems there, where farmers are given what I would describe as a zapper, and they can make a bid from anywhere in the mart building. Covid came along and forced through some very big changes in a short space of time.”

Farmers, like everyone else, faced an unprecedented situation from mid-March, when lockdown forced the closure of the marts.

“Farmers were in a predicament as to where they would sell their stock,” Councillor Burke said. “They had the online facility of the likes of Done Deal. That’s okay, but it’s hard to value stock at times. If you’ve no marts operating at all, you’ve no auction system, then how to you value something? So, farmers were putting pressure on all marts around the country.”

The next option was a tendering system, with restrictions on the number of livestock that could be processed.

“With permission from the Department, we set up a tendering system,” the Whitegate man said. “Farmers were invited to drop off their stock, without any interaction with mart staff, just unloading their stock and handing the passports for the cattle and going away home about their business. Then buyers were invited in, a small number at a time, to view the stock in the mart yard and tender for them. Again, no auction system, at all, just tenders for the stock. So, that worked reasonably well, but only handling small numbers.”

With the re-opening of the economy moving forward over the summer months, the mart had already advanced its online options, with the developers behind an app called Live Stock Live.

“A whiz kid in County Meath is the only way I can describe him – some of us farmers wouldn’t be too well up on technology – developed a system where cattle could appear in the sales ring, live on camera, with an auctioneer working and I could be sitting in Donegal or Wexford today and buy an animal in Scariff Mart because I have the app on my phone,” the Fine Gael member said.

Now that the marts have been allowed to resume sales, in accordance with a set of strict protocols from the Department of Agriculture, farmers now have a choice of options.

“When the Department then allowed the marts to re-open and the stock to come in, for around three weeks, there were no buyers around the sales ring at all,” Councillor Burke explained. “For around three weeks, it was only online. People registered with the mart and got permission to use the facility. Auctioneers got used to the system and got to deal with online bidders. Then the buyers were let in, subject to social distancing. Then the auctioneers had a new challenge – taking bids around the ring, plus watching the screen for the online bidder. They have adapted brilliantly to this.”

The first week in September is normally sees of the biggest sales days in Scariff.

This year, the system was adapted to facilitate a combination of online and in person sales. “The first day was for sales of male weanlings only,” Councillor Burke said. “That was in order to facilitate online sales and give everyone the chance to adjust to the new platform. People are delighted to have the choices. One man told me the atmosphere was surreal, between social distancing and masks, but we understand the need for the guidelines. With the pubs still closed, there’s nobody going for a drink now after the mart, but on the plus side, trade is very good and the online system is working and that’s keeping morale up a bit.”

Fiona McGarry joined The Clare Champion as a reporter after a four-year stint as producer of Morning Focus on Clare FM. Prior to that she worked for various radio, print and online titles, including Newstalk, Maximum Media and The Tuam Herald. Fiona’s media career began in her native Mayo when she joined Midwest Radio. She is the maker of a number of radio documentaries, funded by the Broadcasting Authority of Ireland (BAI). She has also availed of the Simon Cumbers Media Fund to report on development issues supported by Irish Aid in Haiti. She won a Justice Media Award for a short radio series on the work of Bedford Row Project, which supports prisoners and families in the Mid-West. Fiona also teaches on the Journalism programmes at NUI Galway. If you have a story and would like to get in touch with Fiona you can email her at fmcgarry@clarechampion.ie or telephone 065 6864146.
Previous Anger as pensioners excluded from Stay and Spend scheme
Next Anger in Tulla over third incident of theft from graveyard