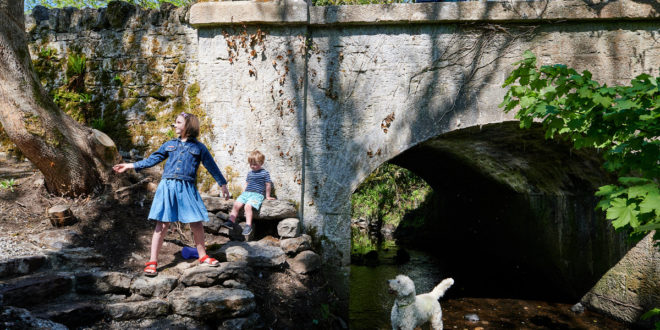 Locals Doireann, Culann and Sadhbh Mc Mahon with their dog Finbarr enjoying some time out at the newly renovated Carrahan bridge on Hell River in Clooney. The bridge along with Rylane bridge was renovated by local people as part of the Clooney Development plan. Photograph by John Kelly.

THE recently-formed Clooney Spancilhill Community Development Group have been making major strides lately in enhancing amenities in their area. A subcommittee, tasked with looking after local heritage, have completed the restoration of two stone bridges at Carrahan and Rylane, and are already planning future projects. The aim of the Heritage Group, which has around ten members, is to record and protect the history and heritage of Clooney-Spancilhill, and the bridge restoration project got under way after Clare County Council engineers conducted a survey and gave the green light.

“People living locally could see one side of each bridge only because of the amount of vegetation that had grown over them,” explained Betty Murphy, a member of the Heritage Group. “There used to be a slipway at the bridge in Carrahan but that was completely overgrown and there had been a problem with dumping in that area too. There was a lot of hard physical work involved in uncovering the stone bridges.” The work on the Carrahan bridge was undertaken by John Skehan, Eamon Murphy and Mike Murphy; while the work on Rylane bridge was done by Micheál Corbett, Micheál Daffy, Mike Flanagan and Pádraig Murphy, with the help of Pádraig McCarthy who did the digger work. “Eamon put in some gravel at Carrahan and put stepping stones in place at the bridge,” said Betty.

The restoration works have been very well received locally and a wealth of stories have been shared by Patrick O’Halloran, one of the area’s older citizens. “Patrick has a lot of very clear and very good information about the bridges, including the story of someone who put the initials of girl he was fond of onto the Carrahan bridge when he was involved in repairing it around half a century ago. There are initials on the other side of the bridge too, but we don’t know anything about how they got there.”

Overall, there has been a great response to the restoration project from the local community, with people praising the beauty of the bridges and local children playing by the riverside. The Heritage Group are now planning works on other bridges in the area once those are approved by Council engineers, and proposals are also in offing with a view to getting names put on the bridges so that they will be retained for future generations.

Fiona McGarry joined The Clare Champion as a reporter after a four-year stint as producer of Morning Focus on Clare FM. Prior to that she worked for various radio, print and online titles, including Newstalk, Maximum Media and The Tuam Herald. Fiona’s media career began in her native Mayo when she joined Midwest Radio. She is the maker of a number of radio documentaries, funded by the Broadcasting Authority of Ireland (BAI). She has also availed of the Simon Cumbers Media Fund to report on development issues supported by Irish Aid in Haiti. She won a Justice Media Award for a short radio series on the work of Bedford Row Project, which supports prisoners and families in the Mid-West. Fiona also teaches on the Journalism programmes at NUI Galway. If you have a story and would like to get in touch with Fiona you can email her at fmcgarry@clarechampion.ie or telephone 065 6864146.
Previous Transport Authority to meet local TDs over future of Clare Bus
Next East Clare pays tribute to the late Nora Butler 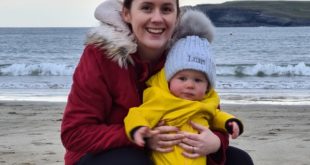