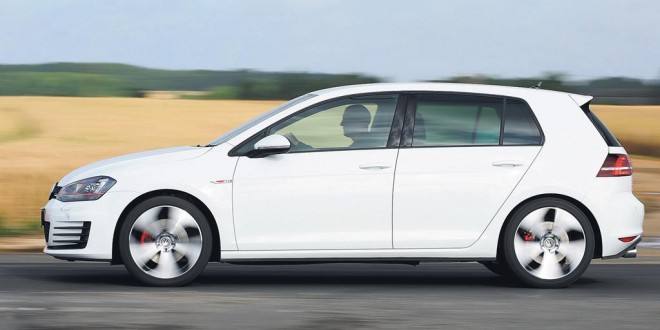 Two high performance models have been added to the Golf range, the new Mk 7 having been launched late last year in Ireland. The new Golf was the best selling car on 131 plates and has already been awarded the titles of European Car of the Year and World Car of the Year.
The new variants are the iconic GTI and the more practical, but no less fun, GTD. Visually, there’s almost nothing to choose between the two, save some minor differences in trim. It’s down to personal preference whether the high revving nature of the petrol or the torque and fuel economy of the diesel floats your boat more.
The new GTI is powered by a new 2.0 litre TFSI which produces 220 bhp and 350 Nm of torque. This is enough to take the car from 0-100 km/h in just 6.5 seconds. Top speed is an impressive 246 km/h. Emissions are particularly low, at 139 g/km, especially given the performance on tap. Prices start at €33,820 and there’s a choice of three or five door bodystyles. A six speed manual gearbox is standard, with a seven speed DSG available as an option.
The GTD is an even more practical option for Ireland, powered as it is by a 2.0 litre turbo diesel producing 184 bhp and 380 Nm of torque. Fuel economy is quoted at 4.2 l/100 km and the car sits in band A3. Prices start at €35,740 and again, DSG is an option, although the diesel car comes with a six speed unit.

Later this year, the Golf BlueMotion will arrive, boasting emissions of just 85 g/km and fuel economy of 3.2 l/100 km. These figures are achieved through use of a lowered ride height, a roof spoiler and other aerodynamic aids, a masked front grille, optimised air cooling and special underfloor panels. It’s powered by a new version of the 1.6 litre TDI producing 110 bhp and 250 Nm of torque. The super-economical Golf will hit the market in December.