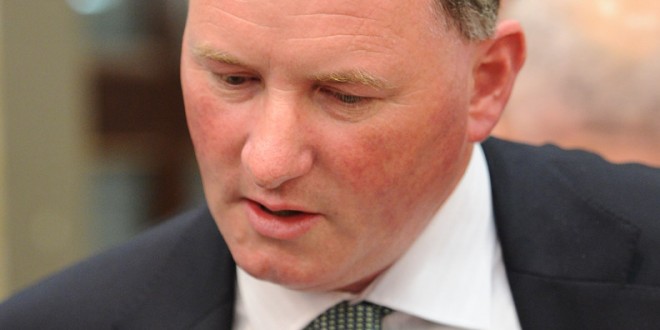 SAFETY concerns over a junctions on the main arterial route into East Clare have been raised by local representatives who have described it as one of the most dangerous in the county.

Henchy’s Cross on the R352, close to Clooney, was described by the Cathaoirleach of the Killaloe Municipal District as a “blackspot” and the site of a number of accidents. Councillor Pat Hayes told the most recent meeting of the area committee that it is time for the authority to take action, now that responsibility for the location has come back into the Killaloe district.

“This crossroads is one of the most frequently used junctions onto the R352 and it’s also one of the most dangerous,” the Fianna Fáil member told the meeting. “It has been the scene of several accidents and I have had one myself at this location. It’s a danger for those coming out onto the main road, as well as for those using the R352, which, as we all know, is the main route into East Clare.”

Councillor Hayes noted the council’s efforts to secure funding to address problems at the junction and said it was essential that a commitment is given to address the situation in the near future.

“What I want is an assurance that this is a priority project,” he said. “There is no doubt but that this is a blackspot and it urgently needs a solution. We must have a guarantee of funding to ensure that this gets done.” The Caher native insisted that the area must not fall into a no man’s land, as it had previously been part of the Ennis Municipal District. Changes to the electoral area boundaries in a boundary commission report of 2018 had brought it into the Killaloe District, effective from last year, he noted.

Councillor Joe Cooney seconded the motion. “It wasn’t in our area 12 months ago,” he pointed out. “It is a very dangerous location. We are all well aware of the number of accidents there and it is something that needs urgent action. There are trees along one side a section of the junction and it’s particularly dangerous. There are lots of lorrys and lots of mart traffic using that junction, as well as people accessing the motorway.”

In the view of Councillor Pat Burke, the issue is of grave concern, particularly to all of those travelling to the mart and towing trailers. “Definitely, from the Ennis side, there is a problem,” he said. “It must be the busiest junction onto any of our regional roads. If you’re towing a trailer and using that junction after coming from the mart, it’s very dangerous. I don’t want to be back talking about this in a year’s time. We need to make sure this is at the top of the priority list.”

Senior Executive Officer Morgan Lahiffe said that now that the junction in question is in the Killaloe District, there is a commitment to addressing safety concerns. He said that funds had been secured for preliminary surveying, but that the pandemic had “put the kibosh,” to some degree, on progress with design work. “The area is going to be top of our priority list, certainly,” he said. “This year, we will be working on design and having talks with landowners. We may possibly have some land acquisition. Rest assured that we will be looking at securing further funding next year.”

A written response to Councillor Hayes’s motion came from John Gannon, Senior Executive Engineer saying that the Road Design Office had “completed the topographical survey and substantially completed the preliminary design for the scheme and are currently preparing the land acquisition drawings”. “It is expected that for 2020, land owner discussions and negotiations will be well advanced if not substantially completed,” Mr Gannon’s response said. “Clare County Council plan to see further funding from the Department later this year for the completion of the project.”

Councillor Hayes thanked the executives for their reply. “I welcome the support of the executive and my fellow members on this,” the cathaoirleach said. “It is a key issue.”

Fiona McGarry joined The Clare Champion as a reporter after a four-year stint as producer of Morning Focus on Clare FM. Prior to that she worked for various radio, print and online titles, including Newstalk, Maximum Media and The Tuam Herald. Fiona’s media career began in her native Mayo when she joined Midwest Radio. She is the maker of a number of radio documentaries, funded by the Broadcasting Authority of Ireland (BAI). She has also availed of the Simon Cumbers Media Fund to report on development issues supported by Irish Aid in Haiti. She won a Justice Media Award for a short radio series on the work of Bedford Row Project, which supports prisoners and families in the Mid-West. Fiona also teaches on the Journalism programmes at NUI Galway. If you have a story and would like to get in touch with Fiona you can email her at fmcgarry@clarechampion.ie or telephone 065 6864146.
Previous Clare Senior & Intermediate Football Championship Preview
Next Miltown direct provision centre to close immediately