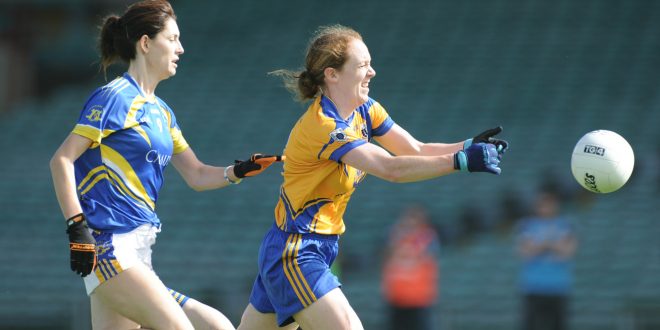 Sheelagh Carew of Tipperary in action against Louise Henchy of Clare. Photograph by John Kelly.

THREE of Clare’s most capable and experienced lady footballers will not be part of the 2017 panel, as the county team prepares for their opening league fixture at home to Waterford on January 29.

Clare manager Neil Moynihan has confirmed that midfielder Louise Henchy has retired, while her Banner Ladies club colleagues Niamh Keane and Emma O’Driscoll have opted not to be part of the panel for this season. All three won All-Ireland intermediate medals in 2009 and were central to Clare’s run to the 2016 All-Ireland final, where they lost to Kildare by a point in Croke Park.

Kilmihil’s Laura Egan, a regular last season, will also not be part of this year’s panel, while Eva O’Dea (Banner Ladies) is still recovering from an injury picked up in the All-Ireland semi-final win over Tipperary.

“We knew after the All-Ireland final that was going to happen,” Moynihan said of the loss of the experienced trio.

“It was openly spoken that 2016 was their last year and they were going to give it a go. Louise Henchy has officially retired. I think she just said that was her last year and she sent her best wishes to all the players. As for Niamh Keane and Emma O’Driscoll, I’m not 100% sure that they have retired but they have definitely opted out for the year. In terms of their futures, I’m not too sure. They could come back in a year or two time. Only time will tell,” the Galway man, who is entering his second year in the post, reflected.

“We’ve lost Eva O’Dea to a long-term injury. We don’t really know the extent of it and how quickly she can get back. It all depends on her rehab and if she gets it sorted, we’d be happy to have her back,” Moynihan added.

Clare had a fit panel of just 19 for the 2016 All-Ireland final but have since added several players to the squad.

“We’ve 16 or 17 new players in so it’s a completely new panel. We’ve lost a lot of players from last year through retirement, long-term injury and one or two have gone away. One or two have opted out as well, so we’ve lost seven or eight since last year. The majority of our panel are youthful. We’ll be going through a transition stage this year. It’s important that we retain our Division 2 status and give championship another good go. The oldest last year was 34 whereas now the oldest is probably about 25. We might have one or two older girls but the average age is from 17 to 25. We’re back about six weeks getting the gym work and some runs in and getting the panel together,” the Clare manager said.

Moynihan maintains the panel’s preparation will be markedly altered in the months ahead.

“From a management point of view, I’ve taken a completely different approach this year. In 2016 we attacked the league from the start. This year we will pace ourselves a bit more and we’re hoping to peak in championship. Last year, from the quarter-final on, I felt our performances were decreasing as time went on. I think that was due to the long season. We’re going to pace ourselves a bit more this year. We couldn’t have asked for a worse start, fixture-wise, in the league. The first four teams are Waterford, Cavan, Westmeath and Laois, who are the four senior teams in our league. Trying to get a result from those four games is going to be tough,” he predicted.