Special collections will take place at all masses across County Clare at the weekend, as part of a national appeal to help people caught up in the current food crisis in east Africa.

Trócaire executive director Éamonn Meehan, from Kilmaley, has urged people to get behind the appeal and support the agency’s efforts to save lives in the affected areas. 25 million people in east Africa are facing starvation in the coming months and millions could die unless they receive immediate assistance. Severe drought, driven by climate change, is currently affecting Kenya, South Sudan, Somalia and Ethiopia and this has resulted in failed harvests and the widespread death of livestock.

The Irish Catholic Bishops’ Conference has called for a national church collection to support Trócaire’s work in the region.

“With the failure of successive rains and a prolonged drought having taken hold of the region, just surviving has now become the main challenge facing the people of east Africa,” Éamons  said. “Millions of people in the region are facing starvation. The crops have failed and animals are dying because of a lack of grazing and water.”

The United Nations has described the situation in the drought-ravaged parts of Africa as the greatest humanitarian crisis since the Second World War but Trócaire says steps can be taken to reduce the number of people at risk if action is taken now.

“Trócaire is working on the ground and providing vital aid to hundreds of thousands of people,” said Éamonn. “We are targeting particularly vulnerable groups including the elderly, people with disabilities and those living with HIV. Our health centres in Somalia are treating 19,000 people each month for malnutrition and associated illnesses. We are also supporting health clinics in places like Turkana in northern Kenya, where 12 per cent of children under the age of five are severely malnourished and at immediate risk of death. The clinics weigh and examine the children and the mothers of those who are identified as high-risk are given a high-protein, high-vitamin supplement to feed them.

“What we are providing at the moment is quite literally life-support for people. In the coming months in Kenya, Somalia, South Sudan and Ethiopia Trócaire is hoping to reach hundreds of thousands more people with emergency food, water and drought tolerant seeds but this can’t be done without the generosity of people in County Clare. I would urge parishioners to please give what they can to the church collection.”

There will be church gate collections this weekend to help a humanatarian food appeal for east Africa.
Previous Planning granted for solar energy farm
Next Belief erodes further that hurlers have it 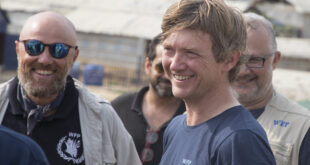