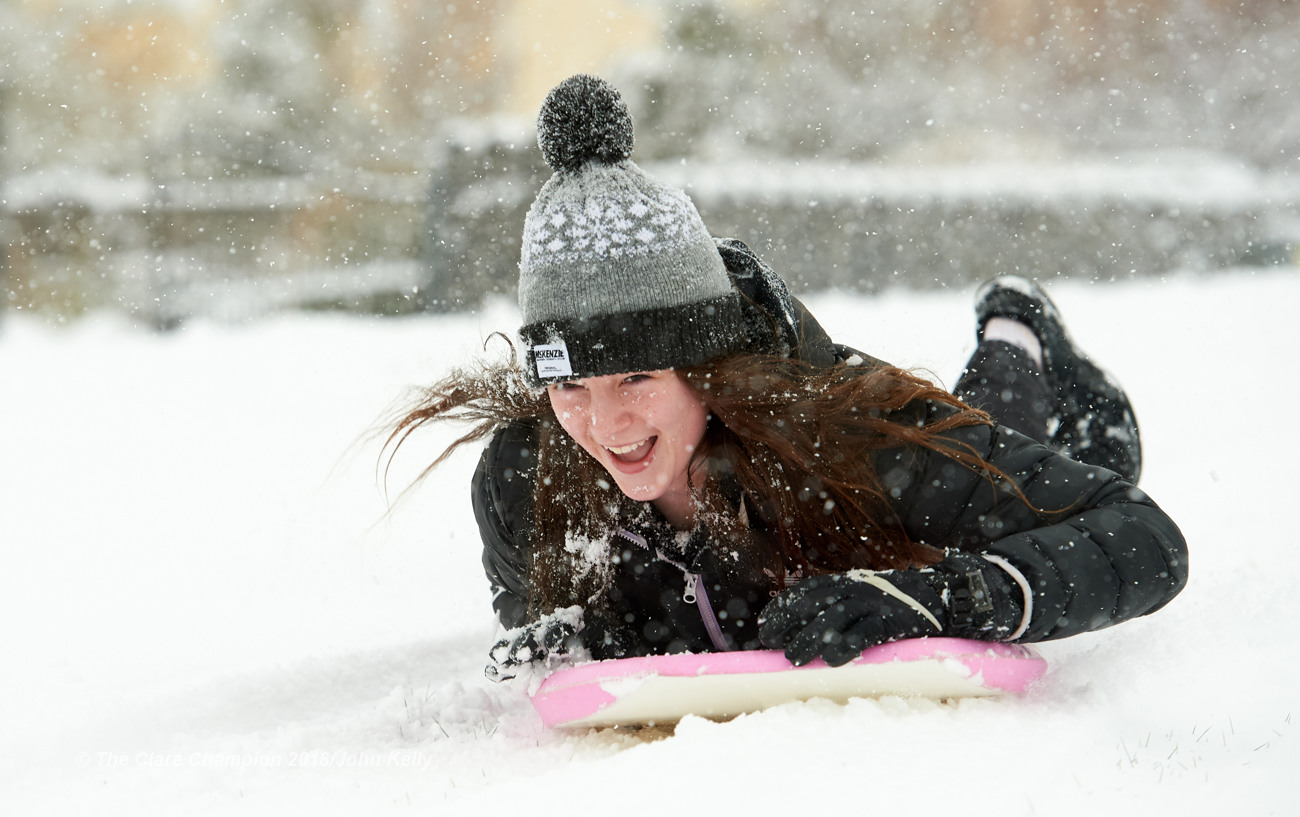 Kate Montwill sledding in the snow at Woodstock View in Ennis. Photograph by John Kelly.

THE county has been hit by the heaviest snowfall seen here for many years, which has seen schools and businesses close and made travel near impossible.

More snow is set to fall throughout the day, and into the early hours of tomorrow morning, with some improvement expected later on Saturday, although temperatures are unlikely to rise above five degrees Celsius.

Met Éireann’s forecast for Munster states, “There will be further snowfall across the province in strong and gusty northeasterly winds; the heaviest snowfall will continue to be across the east of the province. Later in the day the snow may turn to rain or sleet near the south coast. Highest temperatures between -1 and +3 degrees. Strong and gusty northeasterly winds.

“The snow will continue overnight but it will become lighter and the northeasterly winds will ease a little also. Lowest temperatures of 0 to -3 degrees.

“Snow showers on Saturday will gradually turn back to rain or sleet through the day with a slight improvement in temperatures; highs of 3 to 5 degrees. Northeasterly winds will have decreased a little but will still remain strong and gusty.”

An advice notice to stay indoors has now been lifted, but the red alert issued by Met Éireann for Clare, the rest of Munster, Galway and Leinster is in place until at least 6pm this evening and people are urged to remain off the roads unless absolutely necessary.

Clare County Council’s out-of-hours emergency number is 087-4169496) and is in place to deal with requests for assistance from the public in relation to blocked roads, fallen trees and other non-life threatening incidences.

Ennis Book Club Festival was due to take place this weekend, but has been cancelled due to the weather. In a statement it said “This difficult but necessary decision was taken in the interests of staff, contributor and audience safety.”

Refunds are to be issued to ticketholders next week.

Owen Ryan has been a journalist with the Clare Champion since 2007, having previously worked for a number of other regional titles in Limerick, Galway and Cork.
Previous Strengthening family bonds with kidney donation
Next 10-20 CM of snow around Clare