Home » Sports » Heartbreak for hurlers who fought to the end 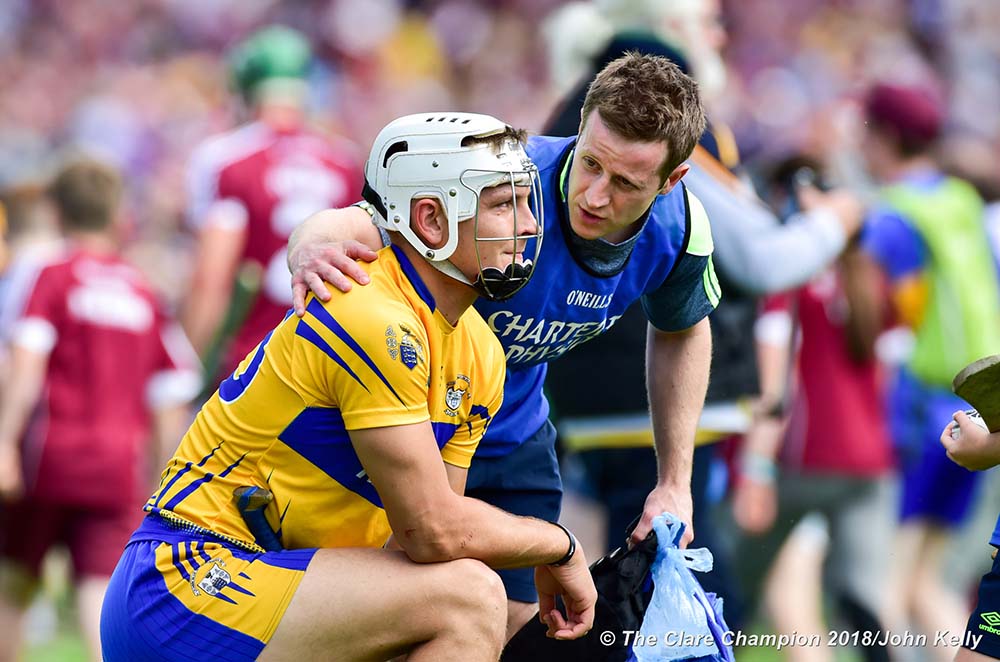 A clearly disappointed Aron Shanagher of Clare is comforted following their All-Ireland semi-final replay against Galway at Semple Stadium,Thurles. Photograph by John Kelly.

Heartbreak for hurlers who fought to the end

AFTER an epic second half, played in front of a crowd of 44,246, Clare agonisingly lost by a solitary point to Galway, who will now play Limerick in the 2018 All-Ireland final on August 19.

Superb second half goals from Shane O’Donnell and Peter Duggan, brought Clare right back into the game and the attendance was treated to an epic second half shootout in Semple Stadium on Sunday afternoon.

However, Galway managed to hang on and are still in with a chance of winning a second successive Liam McCarthy Cup for the first time since 1988.

At half-time Galway led 1-9 to 0-6, although Galway didn’t score for the last 17 minutes of that half. They led 0-5 to 0-1 after 10 minutes, with Joe Canning (0-2), David Burke and Conor Whelan contributing scores in those early minutes.

Peter Duggan put over Clare’s opening two points from frees, while Tony Kelly pointed his sides first from play in the 20th minute.

Within seconds, Johnny Glynn goaled for Galway who led 1-9 to 0-3 at that stage, although it was their last score of the first half.

Clare started David Fitzgerald at midfield, in place of Cathal Malone while Gearóid McInerney was replaced by Niall Burke. Clare hit 11 wides in that half to Galway’s six.

Clare opted to retain Colm Galvin in the sweeping role but they were vastly outnumbered up front as the game evolved. Too often Clare forwards had to beat two men in their attempts to win back possession.

Ian Galvin made an immediate impression from the bench for Clare and ended up with 0-2 from play, while Aron Shanagher scored with his first touch, although he was denied what looked a certain goal by Galway goalkeeper, James Skehill and the post. Peter Duggan also mishit a late free, while Clare hit 19 wides during the 70 minutes.

Clare fought to the last play and while they were beaten, they gave their last drop throughout that incident packed second half.

A more comprehensive match report, along with analysis and interviews will be published in Thursday’s Clare Champion.

West Clare native Peter O'Connell has worked for The Clare Champion for 12 years and covers everything from sport, especially GAA, news, features and has been even known to branch into the fashion scene on occasion.
@@westclarepage
Previous ‘If I had sex with them they’d reduce the debt’
Next Man injured in car accident near Lissycasey