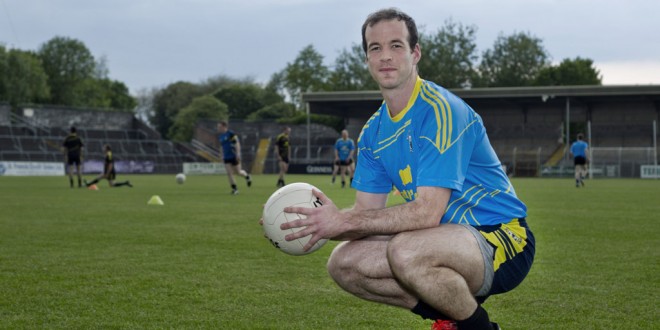 ENNISTYMON’S Laurence Healy has opted to end his nine year inter-county football career. The 33 year old school teacher was not a regular starter in 2014 and has decided to call a halt as Clare near the start of their 2015 division 3 NFL campaign.

“I loved the training part and playing with the best players in the county. Getting to mark some of the best players in Ireland was also something I enjoyed. Last year I was on the panel but I was a sub. When you’re used to starting it’s hard to face into being a panellist. Steven Gerrard had the same issue at Liverpool,” Healy joked.

“I’m not good at being a sub anyway. I know that from last year. I suppose you’re selfish in that way in that you just want to be playing. It was great that the team went well but it’s just not the same when you’re not playing,” he conceded.

Healy said that he spoke to Clare manager Colm Collins on a couple of occasions about his decision.

“I rang Colm Collins at the start of November and I told him I was thinking about it. He said to think about it and ring him back at Christmas. I rang him again the other day and confirmed it. I just couldn’t see myself giving the commitment again to training five nights a week. To face into it again, I don’t know would I be able for it. Mentally it takes a lot out of you. The commitment levels are getting better every year. It’s pretty much your whole life you’re giving up,” he said.

Healy isn’t missing the early January regime but says that come May or June he’ll feel it.

“I’m not missing training at the moment. I’m enjoying my time off but definitely when it comes to championship, that will be the time when I will miss it,” he said, adding that players like Colm O’Neill and Bryan Sheehan are amongst the best he has marked.

Meanwhile Cooraclare’s Rory Donnelly confirmed that he has yet to make a decision on his inter-county future. The Dublin based forward will inform management in February whether he is in a position to commit to another season of inter-county football.

The panel has been boosted in recent weeks by the return of Cathal O’Connor from the UK, where he was based work wise Monday to Friday. The Coolmeen man is now working locally and therefore available for mid week training.

Clare’s opening league game on February 1 is almost certain to be played in Miltown. Speaking to The Clare Champion on Wednesday Clare County Board chairman Michael McDonagh said that the board have no option but to move the fixture to Miltown.

“Drainage work in Cusack Park has been going on with the last few months and is ongoing. It’s about half way there at the moment and we’re doing it as fast as we possibly can. It looks like it will not be ready for the first football game but it will be ready for the second football game,” Michael McDonagh said.