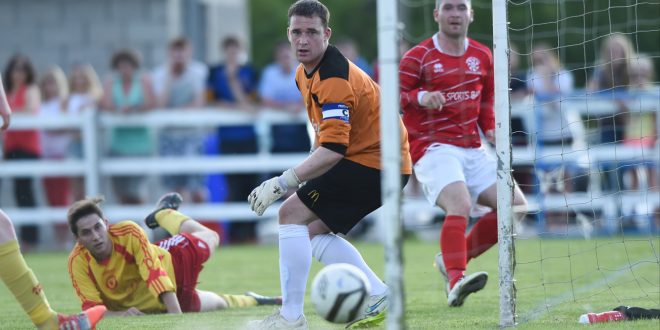 Killian Culligan of Avenue B can only look on as the goal effort of Eoin Hayes of Newmarket Celtic A curls into the net making it 2-Nil during their Soccer Cup final at the County Grounds. Photograph by John Kelly.

Newmarket Celtic A 2 Avenue United B 0

In a year in which they contested the concluding stages of the Munster junior cup, the FAI junior cup and the Munster champions cup, its fitting that Newmarket Celtic should make Clare soccer history.

At a sun splashed Clare soccer county grounds at Doora this Saturday evening, they won the Clare cup for a record fifth year in succession, a result that sees them extend their lead at the top of the roll of honour.

Eoin Hayes scored both goals for the winners and was later named as the man of the match. The first came just after the mid point when Hayes was adjudged to have been fouled in the area after winning possession from a Stephen Kelly delivery and referee Pa Gleeson had no hesitation in pointing to the penalty spot. Brian Callinan picked up a yellow card for the foul and Hayes drilled the ball low to the corner of the net despite the best efforts of Avenue goalkeeper and captain Killian Culligan.

Avenue piled on the pressure and Dave McCarthy saw his effort on goal deflected for a corner a minute after they had taken the lead.

On the half hour mark the winners doubled their advantage whern Hayes won possession as Avenue looked to have matters under control. He then dribbled past a few defenders before shooting low to the right hand corner of the net.

Just before half time Culligan saved well from Seamus Lawlor who came close again in the opening minutes of the second half.

Avenue B had their share of possession and played some good football throughout the tie but they could not break down an experienced and solid Newmarket defence in which central defenders Mark Donlon and Paddy Purcell again ruled matters.

Both sides used their full complement of five substitutes in a second half that produced few clear cut chances.