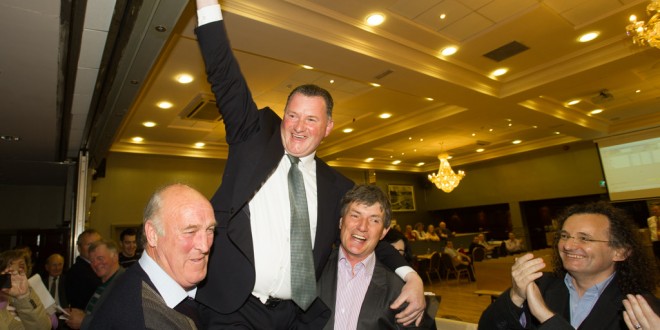 Pat Hayes of Fianna Fail is lifted by supporters after he was deemed elected to the delight of his brother and well known musician Martin, at right, during the election count at The West county Hotel, Ennis. Photograph by John Kelly.

Hayes elected but critical of boundaries

The Maghera native was surrounded by his wife, children and extended family when the results were delivered by returning officer Michael McNamara.

Delighted with the news that he will retain his council seat having netted a total of 1,767 votes, he said he looks forward to celebrating.

He added that it was “disgraceful” that electoral area changes introduced for this election meant communities were effectively divided down the middle. He said during his new term he will be fighting to see the reversal of these boundary changes.

Pat is now looking forward to representing the newly extended Killaloe Electoral Area, which encompasses a significant geographical area of North West Clare, but said he was hugely disappointed that those communities, such as Carron, were now split.

Pat said he is now rooting for his Fianna Fáil colleagues Tony O’Brien, Alan O’Callaghan and Liam Wiley, and feels confident that the new Killaloe Electoral Area will include at least three Fianna Fáil representatives on board.

The result of this latest count looks set to see Michael Begley (NP) and Tony O’Brien (FF), elected in the next few counts.