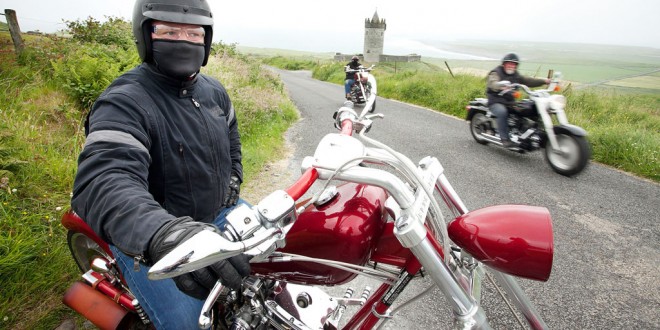 Organisers James Clancy, Mark Clancy and Jimmy Boyle taking a road trip ahead the Doolin Harley Fest on 16th and 17th of August in aid of the Marie McDonagh Clancy Foundation. Photograph by Yvonne Vaughan

THE husband of a Doolin woman who passed away from ovarian cancer earlier this year will lead an entourage of over 200 Harley-Davidson motorcyclists from around the world through the Burren this weekend.

Harley-Davidson owners from across Ireland, the UK and the United States will descend on the North Clare village of Doolin this Friday for the Doolin Harley Fest 2014 which continues through until Sunday.

Marie’s husband James and his two brothers, Mark and John as well as local man Jimmy Boyle are motorcycle enthusiasts and have partnered with Hotel Doolin to organise the festival, which they hope will become an annual event.

Doolin Harley Fest 2014 will feature a charity ride through the Burren, a bike parade in Doolin, a custom bike show in the marquee of Hotel Doolin, BBQ’s on the lawn, a balloon release in memory of those who have died of cancer, and live music all weekend.

Participating bands include ‘The Back of the Hand Blues Band’ featuring Dave Hope, ‘Blues Train’ featuring Johnny Fean, and Crossroads 66.

Harley Fest 2014 gets underway on Friday on the grounds of Hotel Doolin.