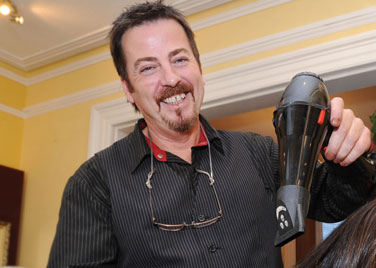 Hairdresser wigs out for cancer patients

AN Ennis hairdresser has come up with an idea that’s a cut above the rest in a bid to ease the trauma of cancer patients who have lost their hair.

Ken Bradley, based at Barracks Court on Barrack Street in Ennis, is asking people to donate good unwanted wigs which will be restyled and given to cancer sufferers.

Ken said he and the rest of his team at the salon were inspired by the recent wave of ‘no make-up’ selfies that have raised money for the Irish Cancer Society.
Having survived cancer himself, Ken told us he was “shocked” at the cost of good wigs, describing the price as “atrocious”.

He explained, “I’m three years free of cancer now but, since I had it, I have met through my salon a lot of people who are cancer survivors, mostly women. Unfortunately, hair loss is a side-effect of chemotherapy. I didn’t have to go through that, I had radiotherapy. But the idea for this came through my clients who have been through cancer and lost their hair and I worked on some wigs for them.

“What really got me was the price of human-hair wigs, it’s atrocious. Many people either fork up the hefty amount or buy a fake wig off the internet that starts to deteriorate or shed after a week or two. Unless you are suffering from alopecia or undergoing severe medical treatment for cancer, you most likely won’t know the price. A lot of wigs are being sold in salons from €500 to €1,000.

“The price is astronomical but, when people are going through this, they will do anything. And the last thing that should be on your mind going through this struggle with cancer is trying to scrape up the cash for an expensive wig.”

Ken, who spent two years training as a hair replacement specialist in Dublin and London, is asking people who have unwanted wigs to donate them to his salon.
“There are people out there who have been through cancer, their hair has now grown back and they may have put their wig aside and they are unwanted. I thought, because of my experience, I will be able to restore them and give them to others who need them.”

The wigs will be cleaned, cut, coloured, styled and fitted for someone with cancer.  The service is free, with Ken instead suggesting that donations be made to Temple Street Children’s Hospital.

“I don’t want to put a price on this. How can you put a price on something like this?” he said.
The salon is also offering to provide a ‘private evening’ for those with cancer who wish to remove their remaining hair. “For many people, it helps to make this a kind of ceremony, bringing them forward to their recovery,” he explained.

He added that all consultations will be dealt with discreetly and professionally and there will be aftercare treatment.
Even if you don’t have a wig to donate and would like to help out, donations can be made at the salon which can be contacted on 065 6840874.