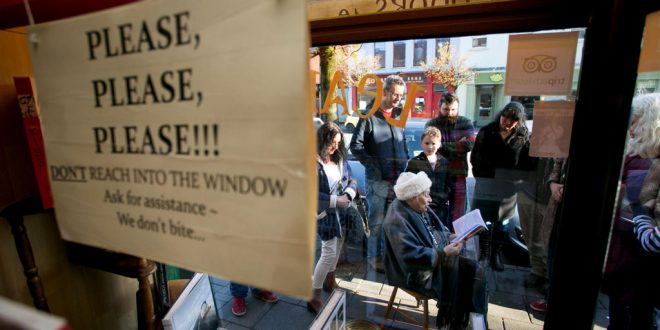 DUBBED Ireland’s Guantanamo Granny, peace activist Margaretta D’Arcy was in Scéal Eile in Ennis this week launching her book of the same name.

The book chronicles Margaretta’s early life through to her battle against Shannon Airport being used to facilitate war, which ultimately led to her being sent to prison.

The first-hand account of D’Arcy’s struggle to open a debate on Shannon Airport is told in a witty way. It follows her journey from her roots in the peace movement to discovering Ireland’s “dirty little secrets” through to direct action, courtroom drama and imprisonment.

Speaking to The Clare Champion, she said she could thank the media for giving her the book title. “My story was taken up by the press who christened me Guantanamo Granny. The one thing one loves is having a brand name. I love it,” she said.

One of the things she explores is her time in prison.

“Limerick jail is absolutely dreadful, it’s kind of like a dungeon, there’s no daylight, the exercise yard is so small. You’ve got to understand that if you have a lot of healthy people in there they need exercise. People go on about obesity and if you can’t exercise, you’re going to put on weight. The women were absolutely wonderful. Being in jail was a microcosm of what it’s like being outside of jail because of the total dysfunction. Nothing ever worked,” she said.

In the book, Margaretta discusses one of the most eye-opening experiences for her in prison – the amount of different nationalities. “You had Vietnamese, Indonesians, Malaysian, Latvians, Poles every single nationality except for the USA and Canada and that was eye-opening. I had no idea. A lot of it was associated with drugs and growhouses. That was a hidden world to me. I had no idea of the amount of women picked up for that kind of thing,” she said.

She noted there are good things happening in prison. She said there are great courses there and the women learn crafts. She said the food was something she complained about and she understands efforts are being made to improve the prison diet.

“The other extraordinary thing is you don’t handle money, so when you go outside the whole idea of shopping or finding out how to shop is gone. Basic skills are removed from them. The crafts are wonderful but what do they do with them. There is nothing to look forward to. The one thing I did find very interesting when I was talking to the women is that shoplifting should be treated as an addiction,” she said.

Shoplifting is like a high. “They wake up in the morning and they have nothing to do and they say they will go and do a bit of shoplifting. It’s the excitement of getting away and if they are caught then they have all the drama of the court. Why can’t they recognise it as an addiction, it would save the State a lot of money?” she asked.

Would she be prepared to go back to prison again in pursuit of her cause against the use of Shannon by the US military?

“I absolutely would, I could write another book. The worst thing you can do is to send writers to jail, because that’s our business.”