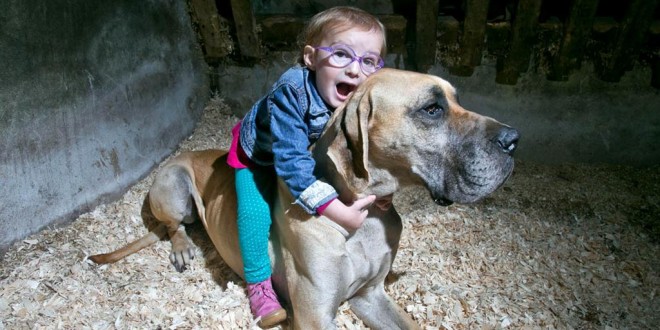 Brianna Lynch at her home in Killaloe with Charlie in 2013. Photograph by Arthur Ellis.

RE-ENACTMENTS of Brian Boru’s heroics against the Vikings are planned for Killaloe next year but a Great Dane has made a pre-emptive strike and stolen the hearts of a local family.

Charlie, a two-year-old member of the much-loved dog breed, has become so attached to toddler Brianna Lynch, who suffers from epilepsy, that he has developed an uncanny ability to detect her frequent seizures, 20 minutes before the start of each episode.

The giant dog simply adores Brianna and is very protective of her any time he senses she is about to have an epileptic fit. In fact, the family pet will pin the child to the wall and not leave her until someone comes to her aid.

Her mother, Arabella, describes the dog’s sixth sense without any training as “amazing”.
“Charlie is so sensitive to her needs; if the other dogs get boisterous, he will stand by her side to ensure she doesn’t get knocked over. We know when he is acting strange, she is going to have a seizure. If the postman comes, he will guide her into the ditch. You would have to see it to believe it,” she says.

While Arabella appreciates the assistance of Charlie, she has joined forces with Deirdre Cullinan from Ahane, whose three-year-old daughter, Mia, is also being treated for epilepsy, to raise €18,000 to purchase a new ambulatory EEG machine that has been sanctioned by the University Hospital, Limerick (UHL). The two women met in UHL while their daughters were getting treatment.

Arabella is hosting a fun ride with the help of the East Clare Harriers Hunt this Sunday, starting at 12noon, at Smith O’Brien’s GAA field.

Acknowledging that times are tough for people, she is seeking donations, no matter how small, on the day.
“It will be fun trekking through the beautiful Clare countryside and mountains, with any jumping optional,” she added.

Deirdre works for GE Capital Aviation Services, who have offered to match whatever the duo raise.

With one in 115 people suffering from epilepsy, which is over 37,000 people, this EEG machine would benefit a large number of children in the Mid-West. An ambulatory EEG is a mobile recording unit, which can be worn for 24 hours, which significantly increases the chance of identifying the area of the brain where a seizure is happening.

With a brain’s electrical activity fluctuating from second to second, routine EEGs only provide a 20 to 40-minute sample of this activity. There is only one machine in Dublin, which has a large waiting list.

“It is frightening because her seizures tend to happen at night. I don’t tend to sleep very well because I am conscious of what might happen.

“She is quite a complex child; she forgets to breathe and then goes into seizure. She has gone through eight different types of medicine; it looks like she needs brain surgery. You learn to live with it.

“A lot of her seizures are at night. You will know by the way she is breathing; if you can’t hear her, she is gone into seizure.

“She is never out of anyone’s sight 24/7. We have incidents where she falls to the floor and hits her head so you have to be mindful of that,” she adds.
Her four other children, Farrah (17), Harry (15), Mia (13) Rose (11), and her husband, Brian are all aware that medication has to be administered to Brianna within two minutes of any seizure to sedate her.

A welcome Dane in Killaloe