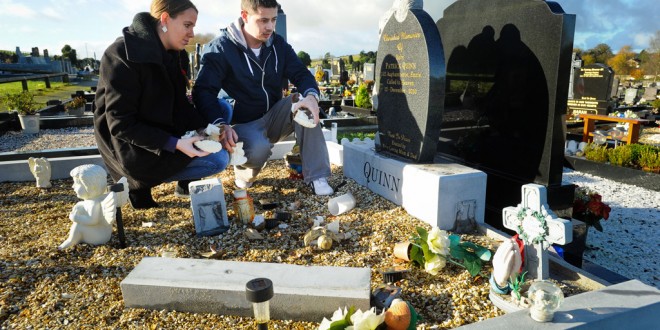 AN Ennis couple were left devastated after the grave of their stillborn son was damaged by vandals last week.

Christina Quinn and her husband Eamon buried baby Patrick almost three years ago. They regularly visit the grave and were stunned when they arrived there last Thursday evening to find it had been interfered with.

Speaking to The Clare Champion, Christina said, “We were devastated, still are devastated. It’s a baby’s grave, why would they do that to a baby’s grave? That’s all I want to say, to get that put in the paper to let people know what’s happening out in Drumcliffe and I think there should be CCTV cameras installed there.”

Christina said that they go to the cemetery two or three times a week and the damage was done at some point between 7pm on Wednesday evening of last week and 5pm the next day.

The two were stunned at the scene that greeted them last Thursday.

“I just broke down and cried, that’s what I did. Both of us were the same way, it’s an awful shock to go out and see your baby’s grave vandalised. How low can they get in this town? They really are getting low when they’re touching baby’s graves.”

Small angel figures at the grave were broken some weeks ago, and while Christina put the damage down to the wind originally, now she feels it was probably the result of vandalism.

She says that action is needed to make sure that vandals aren’t able to continue attacking the cemetery.

“I’m just worried that it’s not going to stop, that it’s going to continue out there. If the council put up CCTV cameras it might help.”

However, the council have said that they won’t be installing CCTV, although they say they have taken steps to provide a deterrent to vandals.

“The Registrar for Drumcliffe Burial Ground was contacted last Friday by a member of the public. He was advised of vandalism to a grave in section D of the burial ground and was requested to install CCTV.

“He advised the person to report the incident to An Garda Síochána and this was done.

“Recently the council has appointed a registrar who is a regular presence in the burial ground. The installation of CCTV cameras is not being considered at this time. The graveyard gates are locked and this measure should assist in deterring anti-social behaviour. We will continue to monitor any issues with the burial ground.”

Previous To star in Hong Kong or Limerick?
Next Sixmilebridge all set for provincial decider