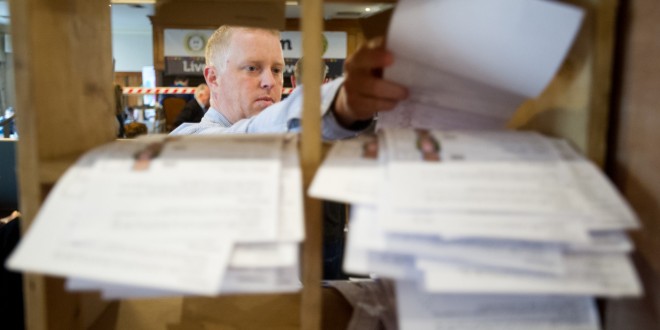 The counting of votes underway at theGE2016 count in Ennistymon. Photograph by John Kelly.

AS Fine Gael and Fianna Fáil inch closer to government formation, opinion continues to be divided on the merits of a historic coalition. The broad consensus, however, suggests that, in this county, support for alternatives options is in short supply.

Both parliamentary parties have been meeting separately to consider a joint framework document agreed by Leo Varadkar and Micheál Martin last Tuesday. It is anticipated that mechanisms will then be explored to canvass the views of councillors and grass-roots members.

Deputies Joe Carey and Cathal Crowe both suggested that, through consultation, those with reservations could be brought around to the coalition option.

“Among Fine Gael councillors there is widespread support, but not unanimity,” said Deputy Carey. “I would say that around 70% favour coalition. People do have legitimate questions and they must be listened to.”

Fianna Fáil’s Deputy Crowe said he would emphasising to party leadership the importance of listening to the grassroots. “I have huge support in our party’s negotiating team,” he said. “I look forward to seeing the framework document to make sure that it delivers for Clare and for Ireland.”

Former long-serving Fine Gael TD and Senator for Clare, Madeline Taylor-Quinn was of the view that Civil War divisions were still a factor for many members of both parties, but that Covid-19 had brought about a new reality.

“Before the pandemic, I would have said that Fine Gael should stay out of government,” she said. “We were put in third place by the electorate. Now, however, we are in unprecedented situation and face a very difficult time for the next number of years. There is a national responsibility to form a government to guide us through the most critical period since the foundation of the State.”

Former Fianna Fáil minister Tony Killeen said that while many in his party would have reservations about the coalition, he hadn’t heard a more convincing option. “A lot of grassroots members of both parties would be opposed to the move,” he said. “If you oppose something though, the onus is on you to come up with an alternative and I haven’t heard any convincing proposals in that regard.”

“We are moving into a situation which will be similar to the one that prevailed after the banking crash,” he added. “Measures had to be taken by government that were unpopular, but they were necessary and proved to be effective. While we may be in a better position this time around to spend our way out of the crisis, we still need a government that is stable and not at risk of coming apart.”

Killaloe District member Councillor Pat Hayes of Fianna Fáil expressed a preference for a short-term national government: “I don’t think that now is the time to be drawing up a long-term Programme for Government,” he said. “The goal posts will continue to shift over the coming months.” The East Clare man also expressed the view that Fianna Fáil had already paid the price for supporting Fine Gael through the Confidence and Supply agreement: “I don’t think Fine Gael did a lot of for Fianna Fáil in the previous Dáil and I think that we suffered as a result. I’m also of the view that the party may have been too hasty in closing the door on Sinn Féin.”

Municipal District and party colleague, Councillor Tony O’Brien also favoured the national unity government on an interim basis. “The electorate voted for change,” he said. “A coalition would fly in the face of what the people said and I would be opposed to it.”

Councillor Joe Cooney of Fine Gael was of the opposite opinion: “I would be in favour of the coalition. The parties have shared power on Clare County Council since 2004. It’s two months since the General Election and it is time to form a government. I don’t foresee a problem in Fianna Fail and Fine Gael coming together.”

Fiona McGarry joined The Clare Champion as a reporter after a four-year stint as producer of Morning Focus on Clare FM. Prior to that she worked for various radio, print and online titles, including Newstalk, Maximum Media and The Tuam Herald. Fiona’s media career began in her native Mayo when she joined Midwest Radio. She is the maker of a number of radio documentaries, funded by the Broadcasting Authority of Ireland (BAI). She has also availed of the Simon Cumbers Media Fund to report on development issues supported by Irish Aid in Haiti. She won a Justice Media Award for a short radio series on the work of Bedford Row Project, which supports prisoners and families in the Mid-West. Fiona also teaches on the Journalism programmes at NUI Galway. If you have a story and would like to get in touch with Fiona you can email her at fmcgarry@clarechampion.ie or telephone 065 6864146.
Previous Milford memorial walk in your own time
Next Claim and counter claim in Beef Plan row