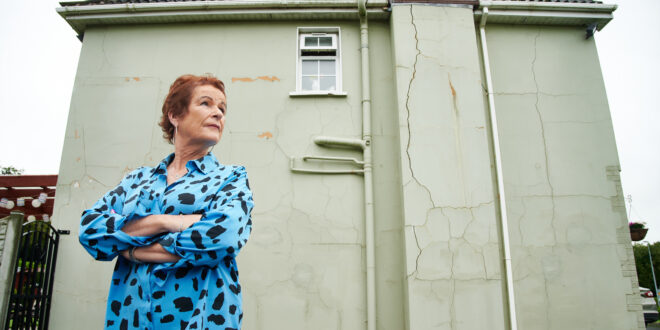 A GRANDMOTHER of ten, living in South East Clare, says she is living in fear over the condition of her home where serious building defects have been identified.

Geraldine Kennedy from Parteen came forward after an article in last week’s Champion, where a woman in the north of the county called on others to join the new Clare Pyrite Action Group.

“My hair has fallen out over this and I’ve had panic attacks,” Mrs Kennedy said. “We are incredibly frustrated because we’ve had to pay for all kinds of tests and repair work and, at this stage, no matter what we do, it won’t solve the problem. I would be afraid the house will fall down and the only option would be to have it knocked altogether and rebuilt.”

Engineer’s reports have shown the presence of a defective material in the blockwork of Mrs Kennedy’s home. The family has already spent thousands on tests to the building to prove the presence of “deleterious materials” like pyrite and mica, but the existing schemes to support affected homeowners are not available in Clare.

Mrs Kennedy outlined how cracks started to appear in her detached home a year or two after the family moved in in the early 2000s. “We thought at first the problem with the exterior gable wall was water damage. Then, cracks appeared inside. The chimney breast started to crack and eventually, around nine months ago, we had to get the chimney taken down, because we were afraid it would fall. It wasn’t safe to park on that side of the house or to let the grandchildren play there.”

The support of an expert engineer is something that the family found invaluable in identifying the source of the problem. “He has been so good and so precise,” Mrs Kennedy said. “He has left no stone unturned. We have had all kinds of tests and these are still going on. Really, we are so frustrated and our kids are so frustrated to see us living like this at our age.”

Last week, Dr Martina Cleary outlined how the appearance of cracks in her home in North Clare led engineers to report the presence of materials, potentially including pyrite and mica. Since highlighting the issue and forming an action group, she said she has been “passed from pillar to post” because the existing support schemes don’t cover homeowners in this county.

In 2019, a remediation scheme opened to home owners in parts of the midlands and east of Ireland. Earlier this year, a scheme was opened for home owners in Mayo and Donegal, affected by pyrite and mica. In 2019, The Pyrite Resolution Board wrote to the then housing minister Eoghan Murphy, recommending that homes in Limerick City and County be made eligible for remediation funding. That process is ongoing.

Dr Cleary is now seeking a meeting with CEO of Clare County Council Pat Dowling, to clarifying the role of local authorities in broadening access to remediation schemes.

She added that she has been contacted by Sinn Féin’s Spokesperson on Housing, Planning and Local Government. Last year, Deputy Eoin Ó Broin highlighted the case of a Clare homeowner who had to foot a bill of €62,000 for latent defects for which they had no responsibility.

The issue was raised in Dáil Éireann in 2018 by Deputy Joe Carey who said he has had a number of representations for homeowners in this county.

The contact email address for the action group is clarepyriteactiongroup@gmail.com.

Fiona McGarry joined The Clare Champion as a reporter after a four-year stint as producer of Morning Focus on Clare FM. Prior to that she worked for various radio, print and online titles, including Newstalk, Maximum Media and The Tuam Herald. Fiona’s media career began in her native Mayo when she joined Midwest Radio. She is the maker of a number of radio documentaries, funded by the Broadcasting Authority of Ireland (BAI). She has also availed of the Simon Cumbers Media Fund to report on development issues supported by Irish Aid in Haiti. She won a Justice Media Award for a short radio series on the work of Bedford Row Project, which supports prisoners and families in the Mid-West. Fiona also teaches on the Journalism programmes at NUI Galway. If you have a story and would like to get in touch with Fiona you can email her at fmcgarry@clarechampion.ie or telephone 065 6864146.
Previous ‘Critical piece of infrastructure’ to protect children’s safety
Next Loss of Shannon transatlantic services would be “marked failure”-McNamara