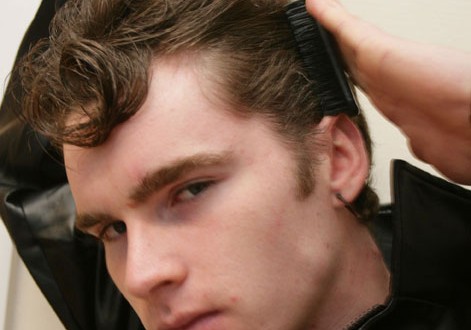 Gort pupils go back to the ’50s

GORT Community School pupils will bring audiences to 1950s America this weekend as they stage the hugely popular musical, Grease.

More than 100 pupils have been working hard since September to bring the fictional Rydell High School of more than five decades ago to the stage. The story follows the fortunes of a group of teenagers as they find their way around love, rebellion and growing up and features hit songs including Summer Nights, You’re The One That I Want and Hopelessly Devoted To You.

Music teacher Tara O’Carroll is the director and choreographer of the production. “One hundred and four students are involved in the show. Some are on stage, some in the band and others have been involved in different capacities. There will be about 80 students on the stage on each of the nights,” Ms O’Carroll explained.

For 17 years, Gort Community School has held concerts to exhibit the musical talents of its pupils but this is the fourth year staging a school musical.
“The reason we picked Grease is because we have a lot of students who are involved in rock bands and have a very strong orchestra, as well as a lot of students interested in contemporary music and musical theatre. We also have a lot of strong male vocalists, as well as female vocalists.

“This show has a great ensemble cast and so it worked for us. Instead of one or two students in the lead roles, you get to showcase at least 10 students in the bigger parts, as well as having a chorus line and dancers so we are playing to the strengths of our students,” she outlined.

National-school pupils from around the locality got the chance to see the results of four months of rehearsals on Wednesday as they packed into the community centre for the preview matinee performance.

According to Ms O’Carroll, the musical is great for the young people who are involved in it.
“Taking part really boosts the students’ confidence and their self-esteem. That is why we have so many students in the show. We have students in it who are in first year, then they come back in second year even stronger and again in third year, until they take on the lead roles in transition year and fifth year. We try to nurture talent from 13 years of age in first year right up through the school. It is really hard work for everyone involved but the reason we have put on a musical for the past few years is because, despite this, it is really worth it,” she stated.

In the Gort Community School production, Cathal Broderick takes on the role of Danny, while Claire O’Donnell will play Sandy. The show’s musical director is Edel Quinn, while the chorus mistress is Fiona Lyons.

“There are about 400 seats in the community centre but people should try to get there early because it is open seating, in other words the seats are not assigned,” Ms O’Carroll said.

Tickets are available from the Gort Community School office and the community centre.