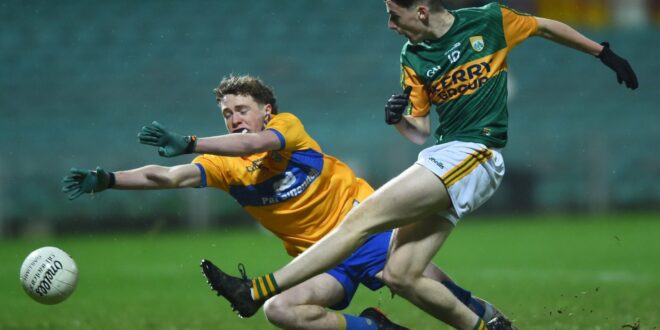 Clare’s bid to bridge a 67 year gap without a Munster minor football title just came short as Kerry continued their dominance of the grade with an eighth consecutive crown.

It was already a historic night in the Gaelic Grounds with silverware being handed out three days before Christmas, but for Kerry it will be a night that will live long in the memory with another record going into the history books.

There may not have been any silverware coming back out the Ennis road with the Clare squad, but there are plenty positives to be gleaned from a year that yielded a Munster final appearance that looked unlikely in the shadow of two lockdowns.

There can be no fault attributed in terms of the workrate and effort of this Clare side who battled to the end, but at times the execution was not at the level shown by their opponents and those errors were punished in clinical fashion.

With Dermot Coughlan’s charges having notched five goals in their earlier two games, the focus was on another forward driven assault, but it was the Kingdom who struck the first blow with a brace of goals in the opening half that saw them build a six point half time advantage.

The first arrived inside the opening five minutes as Keith Evans profited from a clever ball through by Cian McMahon, and he made no mistake with the finish to put Kerry 1-1 to 0-0 clear.

On a night when conditions were far from ideal and “I Wish It Could Be Christmas Every Day” by Wizzard was part of the half time entertainment, Clare began to grow into the contest and had cut that gap to the minimum by the half time break.

Three Diarmuid Fahy frees was their total in the opening quarter with the Ennistymon causing problems for the Kerry defence with his direct running leading to panic at times in the Kingdom backline. Captain Brendan Rouine and midfield partner Brian McNamara were also trying to provide the battering ram from the middle third, but all too often a packed Kerry defence bottled up the space to turn the ball over before that final delivery could be unloaded.

Midway through the second quarter, an outstanding Rouine score, his second of the evening, left just one between the sides. It would prove to be Clare’s last score of the half though as Kerry clinically punished some loose clearances from the Banner defence, and converted it into an unanswered 1-2 on the board to build a 2-5 to 0-5 lead.

A fisted point from the lively Paudie O’Leary served as a warning shot as to what was to come, and it arrived when Cillian Burke’s ball across the square was palmed to the net from close range by Cian McMahon. O’Leary broke at pace to fist over another and when the half-time whistle blew it was the Kingdom with the seeds well sown as they went in with a six point advantage.

The third quarter was dominated by Kerry, and they fired the warning shots early on with four scoring chances going astray. Clare failed to make any inroads at the other end of the field, and those four Kerry wides were followed by five unanswered scores to extend their lead at the final water break to a deserved 2-10 to 0-5.

Two further Kerry points at the start of the final quarter kept them well in control, but Clare kept battling and got their reward as Craig O’Riordan finished from close range after good work from Dylan O’Brien. It left Kerry in front by 2-12 to 1-5 inside the closing ten minutes, but it was mere consolation as the Kingdom closed out the game to continue their dominance of this grade.