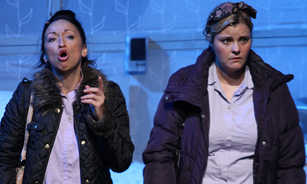 A scene from Fly Me To The Moon.

A NORTHERN theatre company, GBL Productions, will bring their production Fly Me To The Moon to Glór, Ennis on September 21.

The story is about Francis and Loretta, two community care visitors. Davy, one of their elderly charges, has had a big win on the horses, although he isn’t even aware of it. When the two cash-stripped women learn that Davy won’t be around for very much longer, they are faced with a major dilemma.

Marie Jones is the author of a number of major plays, including Stones In His Pockets and Women On The Verge Of HRT. She wrote Fly Me To The Moon specifically for its stars, Tara Lynne O’Neill and Katie Tumelty.

Tara Lynne O’Neill told The Clare Champion that the two main characters might not be the best care workers in the world but their story is interesting and they face issues that most people can relate to.

“These two characters, I don’t know how happy they’d be if they came into my mother. But it’s that struggle of people working so hard but not getting anywhere and I think that’s universal.”

She said she was delighted that Marie wanted to write something for the talents of herself and Katie.
“Marie Jones is a worldwide playwright. She’s had plays on Broadway and she was involved with the Charabanc Theatre Company. Myself and Katie have been involved with some of her plays and we loved her writing, how witty and moving they are at the same time.

“When she said let’s do something together, that’s every actor’s dream to have such a good playwright write something specifically for you, aimed at your talents and what you’re good at.”

The real talent of Marie is in writing recognisable and empathetic characters, she feels.
“I think what Marie does well is write really good characters. In the first five minutes the audience already know these women. They don’t know what they’re going to do but they have an affiliation with them.”

While there may be some difficult situations in the play, she says it is funny and that humour and tragedy go together.
“This is the thing; I don’t think you can have comedy without tragedy and vice-versa. Hopefully, we’ll have the audiences laughing and crying at the same time, that’s the aim of the piece. It’s almost to laugh at the situation. The reviews from New York [where they spent some time last year] are testament to that, that it’s laugh-out-loud funny.”

Irish Theatre Magazine gave the play a very warm review earlier this year.
“It would be difficult to imagine these parts being acted significantly better. Tumelty and O’Neill both show a complete identification with the idiom and mercurial thought-processes of these working-class Belfast women, in a script which is formidably well crafted and modulated: it bristles with the type of jagged, sharp-edged wordplay which is the care workers’ natural response to the straitened environment they live in and their daily defence against it.”