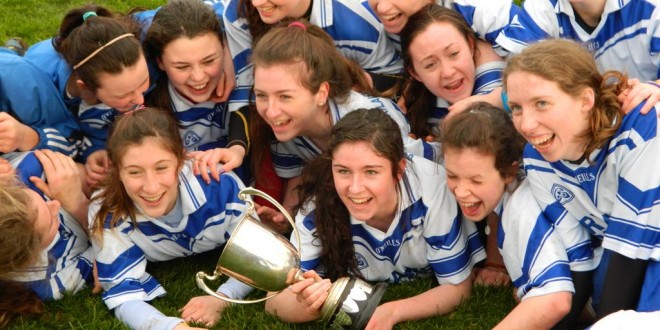 ST Flannan’s College, long known for the prowess of its hurling teams, added a new dimension to their sporting achievements on Saturday afternoon. The senior camogie team are in the limelight following their Munster Colleges A title victory, a first for the school.
A solid defence, the ability to take scores when needed, plus outstanding goalkeeping by Doireann Murphy, saw St Flannan’s in control throughout and return from Ballybricken/Bohermore GAA grounds with the silverware.
With the underfoot conditions soft, St Flannan’s opened the scoring in the fourth minute through midfielder Aoife Keane. Laurel Hill’s Kate Mulqueen levelled matters when she converted a free just over a minute later.
St Flannan’s won the resulting puckout and with the ball laid off to Amie Wiley, the Clarecastle youngster made no mistake as she split the posts to grab the lead for the Ennis school, a lead that was not relinquished.
Aoibhean Malone raised the first green flag of the day for St Flannan’s. Laurel Hill piled on the pressure and Aoife Wilson bore down on the Flannan’s goals, only for Doireann Murphy to come off her line and pull off the first of a number of great saves.
Mulqueen was on target for Laurel Hill with another free but with Flannan’s gaining confidence, they again won the puck out and moved into the danger area, with Orla Devitt finding the net.
St Flannan’s dominated the second quarter and added points from Lauren Touhy, Aoibheann Malone, Carol Browne, Wiley and Devitt to stretch their lead, while, for the opposition, Mulqueen converted another free and Aoife Wilson added two points from play to leave the half time score at 2-8 to 0-5 in favour of the visitors.
Laurel Hill attacked right from the resumption and when awarded a free, Mulqueen had the opening score. She added another free just minutes later and though the Limerick side piled on the pressure, the Flannan’s defence stood firm.
Laurel Hill weren’t helped by some wayward shooting, which saw goal opportunities go to waste.
Touhy fired over Flannan’s first score of the second half, with nine minutes on the clock. Laurel Hill again piled on pressure with their forward line crowding out the area in front of goals but Murphy was in sparkling form and blocked everything.
With 10 minutes remaining, Flannan’s stepped up the pressure and hit two goals in as many minutes to seal victory. The first came when Aoibheann Malone was credited with the final touch, following a high delivery.
Laurel Hill’s Nicole Shanahan saw her puckout won by Flannan’s, and within minutes back in front of her goalmouth. In the resulting, it was Flannan’s who got the last touch, Malone again credited with the score.
Laurel Hill can take some comfort from contesting the senior A final, having steadily climbed the ranks after winning the C and B titles over the last three years.
St Flannan’s now go on to represent Munster in the All-Ireland Post Primary semi-finals against the Ulster champions on February 15.

ST Flannan’s mentor, Clare Ryan said the s victory was a huge boost for camogie in Clare. “A lot of the girls are members of the Clare minor and U-16 panels. This is a very young panel, with only three Leaving Certificate students in the starting team,” she said.
Clare is joined in the backroom team by fellow teachers, Laura Linnane and James Delaney.
In the All-Ireland semi-final, St Flannan’s will play Magherafelt from Derry and the game is scheduled for February 15.
Many of the players, who made history for Flannan’s last week, will be part of the school’s junior team for this Saturday’s final date with St Mary’s, Charleville at a Clare venue to be confirmed.