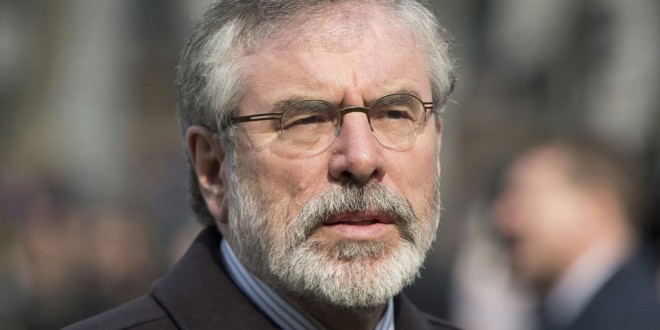 SINN Féin leader, Gerry Adams is unsure if the party will run a second candidate in the county in the next general election, which is expected to be in early 2016.

He also reaffirmed his opposition to Sinn Féin, as junior partners, entering into coalition with either Fianna Fáil or Fine Gael, while he claimed that Fine Gael and Labour are currently engaging in an “auction election”.

He was speaking to The Clare Champion in light of Noeleen Moran’s selection as Sinn Féin’s candidate in Clare.

“Noeleen, in her own right, has a good base. She got over 1,000 votes and narrowly missed being elected to the county council. We have Mike McKee there as well and (presidential candidate) Martin McGuinness got something like 10.5% of the vote in Clare. (MEP) Liadh Ní Riada also got a very, very good vote in Clare.

“Across the island, we had our best election last time out but in her own right, as an activist and a very energetic young woman, Noeleen is a very good candidate. She comes in on a platform of the party doing very well right across the island,” Mr Adams said, adding that he is currently unsure if the party will field a second candidate in Clare.

“I don’t know but obviously anything we do will be in consultation with the local people. The main thing is that Noeleen has been chosen as our candidate.”

He acknowledged that Sinn Féin has work to do in establishing itself as a political force in Clare, given that the party did not field a candidate in the 2011 election.

“I’m always very straight forward about this and some people, who are trying to form political parties now, will know this, you need to build your organisation, capacity and you need funds. You need credible candidates and Sinn Féin is affected by emigration, as is every other sector of the community, particularly in the west. I’m not for one second thinking that we’re going to sail into the next election and sail out with an increased mandate. It’s the people’s day. We have to be very humble.

“We are, in some places, starting off from a very high threshold and, in some places, less so. But it is a fact that the last 10 or 12 years has been a process of politicisation and radicalisation for some people. That doesn’t mean that they’re going to support Sinn Féin but it does challenge Sinn Féin and Noeleen Moran, in this case, to persuade, enthuse and motivate people that there is an alternative to austerity and that the way the government has been doing it is not fair. There is a fair and a republican way to organise society in the interests of citizens and that’s the challenge for us,” the Sinn Féin leader maintained.

The Louth TD says Sinn Féin has not decided who they might enter government with, if the situation arises, in 2016.

“There is a lot of speculation about who will form the government and what parties will go into coalition and what role the independents will play. I think all of that is very, very premature. Sinn Féin will be standing candidates in every constituency. We want to be in government. If we get a mandate to be in government, we will not do what Labour has done. We will not attach ourselves as a junior partner to some bigger conservative party. At our Ard Fheis, I ruled out us going into government with Fianna Fáil or Fine Gael, with them being the senior parties. The reason I say it’s premature is because there hasn’t been a vote cast. We don’t know how anybody is going to do. We mightn’t do as well as we would want to do. There could be a completely new political landscape,” he noted.

“I’m not a great fan of opinion polls but no party at the moment can form a government, so you don’t know if it is going to be a two or three-party government. We don’t know what the mix is going to be. What I’ve been saying to our membership is ‘go out and get the biggest possible mandate. Encourage people to vote for Sinn Féin for an alternative way of governing ourselves.

“It’s dependent on that mandate and dependent on whether we can negotiate a programme for government which advances our mandate. Then Sinn Féin will be in government with whoever we negotiate that with but, if we don’t get the mandate, then the issue doesn’t come into play. I do have great hope that on the back of work done at local level and particularly by Noeleen Moran in Clare, that we will get that mandate,” he observed.

Mr Adams is confident that Sinn Féin are in touch with the issues in a predominantly rural county like Clare.

“A number of us went off about 18 months ago on a listening brief into rural Ireland, along the border corridor and into the west. We listened to farmers, we listened to people who were campaigning for health services and we met with a range of people around the hospital campaigns. We met with local councillors from all parties and we then came forward with a document which is about defending rural Ireland.

“The farther you are away from Dublin and this has historically been the case west of the Shannon, there isn’t the same focus or the same interest. At times, I’ve thought it’s because the smaller population means that there is not a critical mass of votes that governments can chase. But the fact is that things like road infrastructure and the difficulties around inadequate health care services, broadband, the very, very poor public transport system and the closing down of garda stations and post offices are amongst the primary issues in Clare,” he said.

“Go into any village in the west, go up the main street and you’ll see all the recently-closed businesses. What we’re looking for is a new deal in rural Ireland. I’ve been preaching that in a real republic, people have rights and it shouldn’t matter where you live. It’s also good economics. It depends on your idealogical position.

“Our economic position was dismissed without being examined by our opponents. But when you drill down into it, we are looking for an economy which serves the people. Of course we’re pro-business because in order to have decent public services, road services, broadband or sustainable jobs, you need to have a healthy and prosperous economy. That means encouraging medium and small businesses. It means bringing foreign inward investment but it also means being fair and ensuring that the surplus is plunged into those necessary services. At the height of the Celtic Tiger, we argued that the wealth should be put into sustainable jobs, schools, hospitals or infrastructure. That’s all on the record and that was dismissed but once the crash came, there was no problem. They wouldn’t socialise the wealth but there was no problem socialising the debt,” Mr Adams maintained.

He says the current economic recovery has yet to be felt by most people in this country.

“The upcoming election will give people the opportunity to decide whether they want more of the same. It’s quite clear that Fine Gael and Labour are going for an auction election and that we’re going to go through this cycle again. They’re talking about a recovery and then they’re saying that many people don’t feel the recovery. If many people don’t feel the recovery, then there is no recovery. Whatever recovery there is going to be, it has to be fair.

“I tackled the Taoiseach last week and put it up to him, his attitude towards taking the water bills out of people’s pensions, welfare benefits or their wages. Contrast his attitude on that issue to families who are in mortgage distress and his attitude to the banks. It’s black and white. The elite are treated with deference and the ordinary people are just ignored by the government. Sinn Féin will change that.

“We can’t do all of the things that we want to do and we certainly can’t do it all overnight but we can certainly change that,” he stressed.

He is also completely opposed to the possible sale of Aer Lingus.

“The issue of the sale of Aer Lingus is going to affect Clare, Dublin and Cork. Clare is a county that depends an awful lot on tourism and it looks like this government is considering selling off its stake. We opposed this when Fianna Fáil did this the last time. People should be very, very alert and should advocate very strongly against the government doing that,” Gerry Adams urged, adding that he will be visiting Clare in the build up to the election.